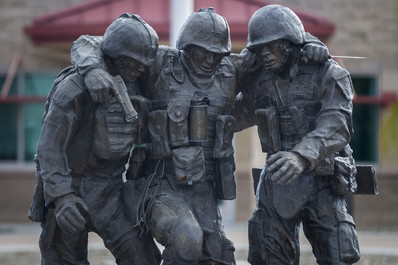 The Costs of War on Terror

In the 20 years since September 11 terror attacks, four times as many deaths among members of the military have been caused by suicide compared to those killed in action. That’s 30,177 active duty personnel and veterans of the post-9/11 wars who have taken their own lives, the Brown University research reports based on Department of Defense figures

The Costs of War on Terror

The Brown University research team’s $8 trillion estimate accounts for all direct costs of the country’s post-9/11 wars, including Department of Defense Overseas Contingency Operations funding; State Department war expenditures and counterterror war-related costs, including war-related increases to the Pentagon’s base budget; care for veterans to date and in the future; Department of Homeland Security spending; and interest payments on borrowing for these wars. The total includes funds that the Biden administration requested in May 2021.

The death toll, standing at an estimated 897,000 to 929,000, includes U.S. military members, allied fighters, opposition fighters, civilians, journalists and humanitarian aid workers who were killed as a direct result of war, whether by bombs, bullets or fire. It does not, the researchers noted, include the many indirect deaths the war on terror has caused by way of disease, displacement and loss of access to food or clean drinking water.

“The deaths we tallied are likely a vast undercount of the true toll these wars have taken on human life,” said Neta Crawford, a co-founder of the project and a professor of political science at Boston University. “It’s critical we properly account for the vast and varied consequences of the many U.S. wars and counterterror operations since 9/11, as we pause and reflect on all of the lives lost.”

The true count of Americans injured or sickened in the war is exponentially larger than the figures given on the official Department of Defense (DOD) casualty website. That official total includes only those “wounded in action.”

Not included are those suffering what are categorized as “non-hostile injuries” and other medical problems arising in theater, such as heat stroke, suicide attempts, respiratory problems, and vehicle crashes.

Other problems are not diagnosed until the injured return home. Toxic exposure from dust and burn pits and resulting respiratory, cardiac, and neurological disease represent another large segment of war zone-induced illness that has yet to be fully recognized.

Traumatic brain injury and PTSD are also major issues among Iraq and Afghanistan veterans. High rates of PTSD among U.S. veterans are alarming, but new evidence also suggests that military mental health providers use PTSD diagnoses to help returning soldiers receive assistance with a variety of problems they face reintegrating into their families and communities: joblessness and drug addictions among them.

All of this makes it difficult to estimate the number of those U.S. service members injured in the wars.

Previous Jim “Horse Collar” Smith Marine Corps Raider served in both WWII and the Korean War
Next Pfc. Jackson at the Battle of Peleliu