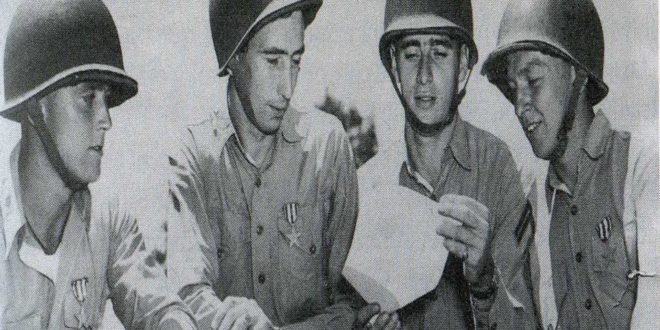 Jim “Horse Collar” Smith, a Marine Corps Raider who served in both World War II and the Korean War, passed away in Fairfax, Va., Jan. 3 at the age of 101. From USMC and WWII National Museum

James Smith was known as Horse Collar. He earned that nickname because he was usually in a harness pulling a cart full of his section’s communications gear. Smith was a corporal and his section leader was a sergeant and they did not get along.

Smith was born in Cleveland, OH, where lived until he enlisted in 1939. He was twice awarded the Silver Star for his actions serving with the 1st Marine Raider Battalion on Tulagi and Guadalcanal, and received the Purple Heart for wounds suffered at the Battle of Bloody Ridge.

He decided to sign up for the CMTC. They went to camp for four years and took some extension courses and you got a second lieutenant’s commission in the army. While there, he loved the close order drill and the weapons. Smith’s drill instructor was a big, tough army sergeant and was the biggest most powerful man he had met in his life.

War broke out In Europe in September of 1939 and Smith went down and tried to immediately join the Marines. He had to get a tooth fixed that he had broken and he was not accepted until 1 November 1939. He was sent to Parris Island. It was rugged back then. There was no parade deck.

They did all close order drill in sand which was full of sand fleas. It was miserable but the training was excellent. Smith did well at the range, particularly with pistols. He had to take an aptitude test that selected him for communications school at Quantico.

Just before Christmas 1939, he was shipped up to Quantico and became a radio operator. After initial training, those who could not copy Morse Code very well and did not know much about radio physics were sent to the FMF Fleet Marine Force. Those who were held over for the advance portion thought that they were going to be sea going [Annotators Note: assigned to capitol ships] and go to China or some exotic place. When they finished the course they were sent to FMF also. It was a blow to their pride.

Smith was assigned to H and S, 5th Marines (Note: Headquarters and Service Company, 5th Marine Regiment, 1st marine Division]. In 1940 they went to Cuba to Caravella Point. They practiced landings and trained the 1st Army Division [ US Army’s 1st Infantry Division]. They came down from Fort Devens, Massachusetts and the Marines trained them in amphibious tactics. The French had an aircraft carrier in the Caribbean at Martinique.

They also had a number of Curtis fighter planes on the carrier. Smith heard that the reason they were really in Cuba was to take that aircraft carrier back because the French were already going over to Vichy and lining up with the Germans. The United States did not want it down in their waters. In April 1941 they returned to the United States. While in Cuba they took competitive exams for selection to go to the Naval Research Lab. Smith aced the exam and the sergeant that he did not get along with missed the final question. Smith got picked and the sergeant made life pretty miserable for him until he got detached to go to the Naval Research Lab. Smith stayed with the Naval Research Lab until February of 1942. They got telephonic orders.

They wanted a young, unmarried Marine, willing to volunteer for the First Radar Battalion . Then the written orders came through and it said the 1st Raider Battalion, not Radar Battalion. Smith did not volunteer right away. He and the Chief Pharmacist Mate got volunteered and were issued orders to report to Quantico.

Before they left San Diego on 13 April 1942, he had finally volunteered and so did the chief. It was an all volunteer battalion which did not sit well with the rest of the Marine Corps. The Marine Corps thought that all the line units were every bit as good as the special units like the Raiders. Smith feels that at that point in history, he would have to differ with them.

But in the Raider Battalion fitness was important because Edson insisted on it. Training at Quantico, Smith would go on forced marches often. Edson would be up at the front of the column and would drop back to see how they were doing. The next thing they knew, he would be running by them to get back to the head of the column. He was in his 40s and that was an old man compared to them. Smith had just turned 21.

Following his service as a Marine, Smith had a distinguished career as a Foreign Service officer. Over the years, Smith met frequently with his fellow Raiders to reaffirm their bonds and inspire future generations with stories of their service.

James “Horse Collar” Smith describes his experiences during the Battle of Bloody Ridge on Guadalcanal in September 1942.

Previous Ballad of the Green Beret: Dolly Parton
Next The Costs of War on Terror