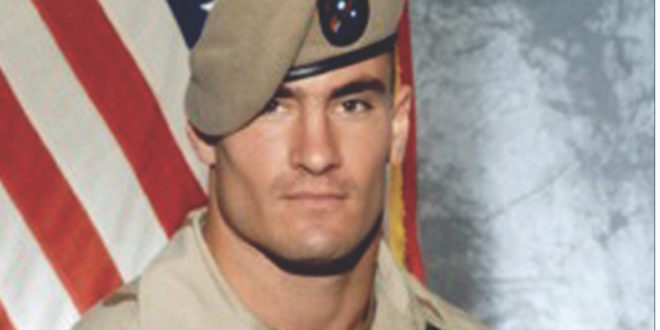 The Legacy of Pat Tillman; shot and killed in Afghanistan 2004

The day after the attacks of September 11, 2001, Pat told a reporter, “At times like this you stop and think about just how good we have it, what kind of system we live in, and the freedoms we are allowed. A lot of my family has gone and fought in wars and I really haven’t done a damn thing.”

In the spring of 2002, Pat married his high school love, Marie, and upon his return from their honeymoon, announced to the Cardinals he had decided to place his NFL career on hold to enlist in the U.S. Army with his brother, Kevin. The decision shocked many and garnered national media attention despite his refusal to speak publicly about the choice.

Pat and Kevin joined the U.S. Army that July, committing to a three-year term. They were assigned to the second battalion of the 75th Ranger Regiment in Fort Lewis, Washington. They served tours in Iraq during Operation Iraqi Freedom in 2003, and in Afghanistan during Operation Enduring Freedom in 2004. On the evening of April 22, 2004, Pat’s unit was ambushed as it traveled through the rugged, canyon terrain of eastern Afghanistan. His heroic efforts to provide cover for fellow soldiers as they escaped from the canyon led to his untimely and tragic death via fratricide.

While the story of Pat’s death may have been the most publicized in the War on Terror, it is Pat’s life, principles and service that are his true legacy. Pat’s family and friends started the Pat Tillman Foundation to carry forward that legacy by giving military service members, veterans and spouses who embody those principles the educational tools and support to reach their fullest potential as leaders, no matter how they choose to serve.