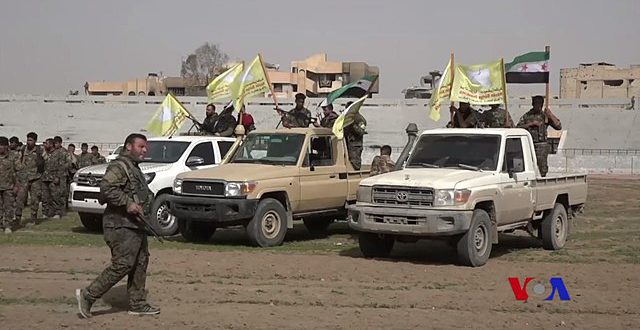 It’s one of the most recognizable vehicles of modern war: the unarmored, modified, tricked out Toyota “technical” pickup truck. The vehicle has solidified its place amid various conflicts across the Middle East, North Africa, and beyond. The brand became prominent at war in 2014, when Daesh propaganda videos included vast columns of armed Toyota Hilux and Land Cruisers in Iraq, Syria, and Libya.

And it’s not just ISIS that uses the vehicle. The Toyota pickup is the war chariot of choice for non-state or weak-state forces that don’t have their own tanks or other military vehicles, but who need to travel quickly across many types of terrain. The Toyota “is up to the job, and a”technical” also has a truck bed that can carry big weapons.

For those reasons, the Toyota war-pickup predates 2014.

In the 1980s, the vehicles featured so prominently in the conflict between Chad and Libya, that the clash was named ”The Toyota War.” In the fight against Libyan Colonel Muammar Gaddafi’s Ltroops, soldiers from Chad used Toyota Hilux and Land Cruisers. Libya lost an estimated $1.5 billion in military equipment and 7,500 troops killed, while Chad lost some 1,000 Chadian troops.

In the Soviet-Afghan War, Soviet soldiers used the Hilux or Land Cruisers mounted with heavy weapons.

From the 1990s onward, the so-called “Toyota technical” modified truck was used in Africa and the Middle East. Fighters from all sides used the vehicles, which fund their way into units with Afghanistan’s Northern Alliance and the Taliban, plus ISIS and the Iraqi Army.

Toyota maintains that it does not funnel the trucks to war.

“Toyota has a strict policy to not sell vehicles to potential purchasers who may use or modify them for paramilitary or terrorist activities,” a spokesperson said. “However, it is impossible for any automaker to control indirect or illegal channels through which our vehicles could be misappropriated, stolen, or re-sold by independent third parties.”

The truck nevertheless continues to find its way into conflict, including Somalia, where it has been dubbed “the pirate ride of choice.”