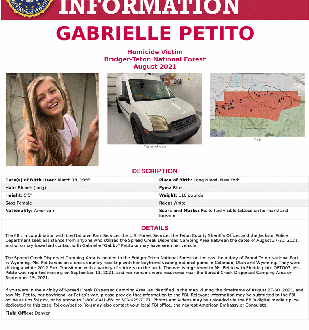 The FBI, in coordination with the National Park Service, the U.S. Forest Service, the Teton County Sheriff’s Office, and the Jackson Police Department seek assistance from anyone who utilized the Spread Creek Dispersed Camping Area between the dates of August 27-30, 2021, and who may have had contact with Gabrielle "Gabby" Petito or may have seen her vehicle.

Trail of death? At least nine bodies discovered during search for Gabby Petitio and Brian Laundrie

A massive manhunt for a fugitive and hunt for a missing victim let to the discovery of at least nine other bodies.

The FBI was on the case with chapters in Colorado, and other FBI and Law enforcement officer joining the massive National Manhunt for Gabby Petito who went missing 11 September. As FBI wrote, “in coordination with the National Park Service, the U.S. Forest Service, the Teton County Sheriff’s Office, and the Jackson Police Department seek assistance from anyone who utilized the Spread Creek Dispersed Camping Area between the dates of August 27-30, 2021, and who may have had contact with Gabrielle “Gabby” Petito or may have seen her vehicle.

Trail of death? At least nine bodies discovered during search for Gabby Petitio and Brian Laundrie

Posted by: Scott A. Davis of Lawenforcement Today weighs in:

During the nationwide manhunt for Petito and Laundrie with a massive mobilization of resources and media interest, authorities recovered the remains of nine other missing persons, including one with a tragic story similar to that of Petito.

Emily Ferlazzo, 22, was reported missing by her parents Monday after her husband, Joseph Ferlazzo, 41, returned to her parents’ house in New Hampshire, saying he had not seen her since Saturday.

Like Laundrie and Petito, the Ferlazzos were traveling together, living in a small bus they converted into a home. Joseph Ferlazzo reportedly confessed to shooting her in the head and dismembering her body in the camper.

Authorities reportedly found the camper and bags of human remains, a handgun, and a handsaw. The remains were shipped to the medical examiner Wednesday for identification.

Joseph Ferlazzo has pleaded not guilty despite his admission, according to a report in the Daily Mail.

The Daily Mail reported on three other bodies found on October 9 in three different states with the help of the manhunt.

In California, the remains of Lauren Cho of Farmington, New Jersey, were located near where she disappeared on June 28 in Yucca Valley. She was last seen with her friends and former boyfriend shortly before her disappearance.

Although there is no direct connection to the Petito case, the Daily Mail said the renewed interest in cases similar to Petito’s that have not garnered as much media attention contributed to Cho’s discovery.

Also on October 9, members of the Douglas County Search and Rescue in Colorado found the remains of missing person Sara Bayard off Highway 83 and North Pinery Parkway.

According to the El Paso County Sheriff’s Office, Bayard was last seen on June 28 at a gas station in Parker. She was reported missing on July 4.

The Douglas County Coroner has yet to determine the cause of death for the 55-year-old woman.

A third body found on the same day was loosely linked to the search for Laundrie. The Daily mail wrote:

“The third body found on October 9, has been identified as Josue Calderon. The body of the 33-year-old man from Rhode Island was discovered stabbed to death on the Blue Ridge Parkway along the Appalachian Trail below the Yadkin Valley Overlook in North Carolina.

“Before Calderon was identified, rumors began to circulate that the body may belong to Laundrie who the FBI and other investigators have been searching for along the Appalachian Trail.”

Miya Marcano, a student at Valencia College in Orlando, Florida, went missing on September 24. Her body was found on October 2 with her hands and feet bound and her mouth covered with tape, according to the Orange County Sheriff’s Office.

Armando Caballero, a 27-year-old maintenance employee at who worked at Marcano’s apartment complex, was found dead by suicide at a different complex in Seminole County while authorities were still searching for Marcano. He is the prime suspect in her death.

Daryl Washington, the attorney for the Marcano family, said that Marcano’s disappearance should have had the same level of coverage as Petito’s:

The search for Petito’s body in Grand Teton National Park, where her remains were found, led authorities to discover the body of Robert ‘Bob’ Lowery of Houston. He disappeared on August 20 after he was last seen carrying camping equipment into Bridger-Teton National Forest.

It was later determined that Lowery had committed suicide.

Law Enforcement Today Editor’s note: In 2020, we saw a nationwide push to “defund the police”.  While we all stood here shaking our heads wondering if these people were serious… they cut billions of dollars in funding for police officers.  And as a result, crime has skyrocketed – all while the same politicians who said “you don’t need guns, the government will protect you” continued their attacks on both our police officers and our Second Amendment rights.

And that’s exactly why we’re launching this national crowdfunding campaign as part of our efforts to help “re-fund the police”. VISIT LAWENFORCEMENT TODAY for a deeper dive