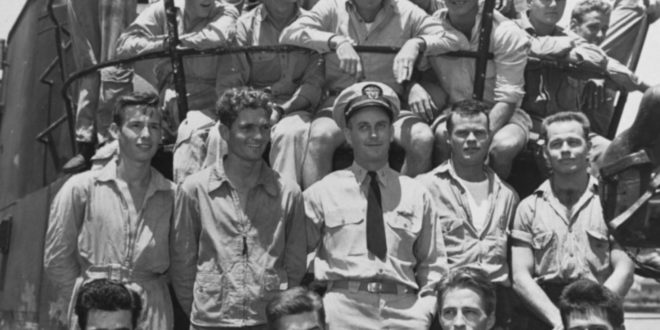 The commanding officer of the USS Tang, Navy Cmdr. Richard H. O'Kane (center), poses with the 22 aircrew members that Tang rescued off Truk Atoll during carrier air raids on April 29-May 1, 1944. The photograph was taken upon Tang's return to Pearl Harbor, Hawaii, from her second war patrol in May 1944.

Navy Rear Adm. Richard H. O’Kane is considered the most successful submarine commander of World War II, sinking and damaging several Japanese warships in the Pacific. His last patrol was hampered by a rogue torpedo, but the leadership he showed throughout that mission earned him the Medal of Honor.

O’Kane was born Feb. 2, 1911, in Dover, New Hampshire, as the youngest of four children. After graduating high school from Phillips Academy in Andover, Massachusetts, O’Kane attended the U.S. Naval Academy. He graduated and earned his commission in 1934.

O’Kane spent the next few years on surface ships before becoming a submariner and serving a four-year stint on the USS Argonaut. Shortly after the U.S. entered World War II, the USS Wahoo was launched, and O’Kane was chosen as its executive officer. He served on five patrols with the Wahoo before taking command of the newly commissioned USS Tang, which began its first patrol in January 1944.

Over the next several months, the Tang sank several enemy ships and earned a Presidential Unit Citation. It also rescued 22 downed U.S. aviators, whom the Tang then shuttled more than 3,000 miles back to Pearl Harbor — a feat O’Kane made possible by cutting both crew and aviator ration in half for the trip, O’Kane’s Washington Post obituary said.

The Tang was retrofitted and overhauled in the summer of 1944, but it was back in action by September when it sank two Japanese cargo ships.

By this time, O’Kane was already considered one of the most successful U.S. submariners of the war; however, it was his ship’s fifth and final patrol that cemented his place in history.

On Oct. 23, 1944, the Tang was operating near the Taiwan Strait in the South China Sea when it spotted an enemy convoy headed to Leyte Gulf in the Philippines. That area was where Allied troops were preparing to win back the island from Japanese invaders who took it over early in the war.

Then-Cmdr. O’Kane ordered the Tang to move in for a night surface attack, which put them right in the middle of the convoy. The sub fired several torpedoes and hit three of the enemy ships, which were all damaged or sunk.

As the Tang readied itself to fire on one of the tankers, O’Kane noticed the transport coming toward them at ramming speed. The sub didn’t have room to dive, so O’Kane ordered it to whip around. That caused the transport to swing around to avoid hitting one of its own tankers, which was also trying to ram the Tang. The two enemy ships collided. Soon after, the Tang fired four shots at the tanker and sank it.

The Tang then raced toward the open ocean to escape the rest of the convoy’s wrath. O’Kane ordered the sub to fire its remaining torpedoes on two of the ships, a move that sank one and helped the Tang get away.

The next morning, the Tang was at periscope level on its way to Turnabout Island when radar identified another heavily escorted enemy convoy. The ships were piled high with crated planes and other supplies to help reinforce the Japanese campaign at Leyte Gulf. Seeing this, O’Kane prepared his men for another battle.

Once the Tang made itself known to the convoy, it was relentlessly fired upon. Despite that, the Tang got within 1,000 yards of the convoy and fired several torpedoes. Two transports and a tanker were each hit twice, causing violent explosions.

The Tang then fired two more torpedoes, which blew up another enemy tanker and damaged a transport ship. An enemy destroyer heading toward the Tang also blew up, either from friendly fire or due to one of the sub’s torpedoes, according to naval historians.

When the Tang used its last two torpedoes on the damaged transport, the first hit its target; however, the second inexplicably backfired. Navy reports show it surfaced, curved to the left and somehow made a circle that brought it right back to the Tang. The sub tried to avoid the rogue torpedo, but it couldn’t. The projectile smashed into the Tang’s torpedo room, sinking the sub from which it came.

Only nine of 87 crew members, including O’Kane, survived. A few had been on the ship’s bridge with O’Kane when the torpedo hit. The others were stuck inside the sinking vessel but were able to get out using an underwater escape device called the Momsen Lung.

After treading water for hours, the sub’s survivors were picked up by a Japanese destroyer – survivors of the ships they’d sunk, no less. They spent the next 10 months as prisoners of war in the Tokyo area until the war was over. Newspapers reported that O’Kane weighed 88 pounds and suffered from beriberi and scurvy when he was finally freed.

Even though the Tang sank, its last patrol earned the sub another Presidential Unit Citation and O’Kane the Medal of Honor. O’Kane received the nation’s highest medal for valor from President Harry S. Truman on March 27, 1946, during a White House ceremony.

“O’Kane was probably one of the finest skippers I served under,” William Leibold, a boatswain’s mate aboard the Tang, said in a 1999 article in the Honolulu Advertiser newspaper. “O’Kane was a good leader. He was stern, but fair. And I think everyone on board had complete faith in his ability.”

According to the Naval History and Heritage Command, the Tang was credited with sinking 24 ships and an estimated 93,824 tons of cargo. However, O’Kane said that various research and records left the door open to revision of the numbers. He said he believed the total was 33 ships and 116,454 tons sunk.

After the war, O’Kane continued on in the Navy. By the early 1950s, he was promoted to captain and put in command of the submarine school in New London, Connecticut. He was serving in the Bureau of Ships when he retired as a rear admiral in 1957.

According to O’Kane’s Washington Post obituary, after the military, he worked for the Great Lakes Carbon Corp in New York before moving to Sebastopol, California, to become a rancher. O’Kane also wrote two books about his war experiences.

O’Kane, who suffered from Alzheimer’s disease later in life, died at the age of 83 on Feb. 16, 1994, at a nursing home in Petaluma, California. He is buried in Arlington National Cemetery.

O’Kane’s legacy lives on. The USS O’Kane, a Navy destroyer, was commissioned in Pearl Harbor in 1999 and continues to serve based out of San Diego. The former rear admiral’s Medal of Honor is kept at the USS Bowfin Submarine Museum and Park in Honolulu.