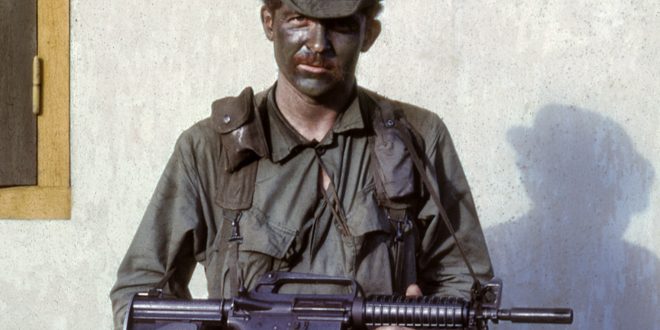 Above: Sergeant First Class Wilson Hunt, One-Zero of RT Maine, seen with face paint and the traditional post-mission beer as he returns to the Kontum helipad following a 1968 recon action across the fence. Wilson Hunt.

Slam VII: “Shot All to Hell.” The action involves a company-sized reconnaissance team from FOB-2 Kontum which has already been on the ground for a week. Ordered in to search, locate, annihilate, and monitor enemy resistance, the members of SLAM VII have already suffered greatly. Eighteen American Green Berets and supporting aviators have been wounded, two have been killed, and the company’s indigenous soldiers have already suffered 36 wounded, six missing in action, and four KIAs.  Reprinted by permission, from  Stephen L. Moore, Uncommon Valor: The Recon Company That Earned Five Medals of Honor and Included America’s Most Decorated Green Beret (Annapolis, MD: Naval Institute Press, 2018).

“We were too large a group to be able to go unnoticed,” said Tom Jaeger.28 The lieutenant, placed in command after his captain had been ordered out, realized that the NVA knew exactly where his Hatchet Force company established their RON site each night. Jaeger moved his company down Highway 96, zigzagging in the general direction of where the enemy’s 37-mm guns were suspected to be located. He made his next RON site deep in the jungle in an area so rocky that Steve Roche and Joe Parnar could scarcely scrape depressions deep enough in which to rest. Jaeger called for a resupply on the morning of November 17, as his men were running short of food and supplies. The first plane came in low, but Lieutenant Lee Swain watched in disgust as the parachute supply bundle drifted far from their LZ and landed near a far tree line occupied by the NVA.29

​It was deemed too dangerous to attempt to retrieve. Fortunately, the second bundle landed only about a hundred yards from their perimeter and the men were able to retrieve it. The wooden case, although marked as “mortar ammunition,” was found to contain numerous cartons of cigarettes. “I got five full packs of Marlboros,” said Parnar. “I remember how the first cigarette I lit up made me dizzy from not having smoked for so long.”30

​Jaeger moved the SLAM company another quarter-mile to a new clearing and called for another chopper drop of food and plastic bottles of water. As his recon men hurried to move the goods back to the new perimeter, gunfire broke out on the LZ and a Montagnard was hit in the elbow by an AK round. Bob Howard charged forward down the hill, with medic Parnar close behind, both firing at the NVA until they could pull the Montagnard to safety and apply first aid.

An estimated two squads of NVA were responsible for the intense small-arms fire that swept through the small security element left to guard the supplies. Lieutenant Walt Huczko led his platoon back to the LZ and directed their fire until the supplies were moved to a safer position. Lloyd O’Daniel was credited with killing three VC and wounding several others before the aggressors were forced to break contact. During the night, Parnar became worried enough about his noisy wounded Montagnard that he administered morphine to prevent the wounded man’s groans from drawing more NVA fire. Shortly after daybreak on November 18, Jaeger was able to get the Montagnard extracted. The company continued to make progress toward its target area, split into two columns sixteen yards apart to give them opportunity to return fire to their left or right flanks.31

​By mid-afternoon, the SLAM company had emerged from the dense jungle to a point near Highway 96 with a large clearing and an intersecting, well-worn secondary road. “We were told to move across the clearing to a tree line,” said Lee Swain.32 Lieutenant Jaeger, sensing something was wrong, called Leghorn to request a Dak To–based FAC to be placed overhead as they crossed the exposed area.

​Once the air cover arrived, Jaeger ordered his company to move on. Bob Howard and Lieutenant Swain took point and began walking together across the tall grass of the clearing, lined with thickets of trees on each side. They were side by side, with various Montagnards spread out behind them, abreast rather than in a file. About three-quarters of the way across, Howard suddenly paused and motioned to Swain.

​“There’s NVA up ahead, in the tree line. What should we do?”

​The pair opened up with their CAR-15s on the NVA concealed ahead of them. As the enemy responded with rifle grenades and automatic fire, Jaeger realized his company had nearly walked right into the kill zone of a large NVA force. “They had us surrounded,” he said. “Howard and Swain had tripped the ambush before we walked into the kill zone. Then all hell broke loose.”33 He found himself in the center of the initial barrage of fire about thirty yards behind his point men.

​Swain and Howard dropped to the ground near a small bush and returned the fire coming from the tree line. Shortly into the fight, an RPG round screamed in and exploded with terrific force beside Swain. He looked back and saw that his left foot was at an odd angle, but he could not immediately comprehend how severe his injuries were.

​The recon sergeant glanced quickly at the lieutenant and reassured him, “You’re okay.” He continued firing into the tree line.

​Howard could see that the lieutenant’s wounds were life threatening but for the moment they had no choice but to continue firing back at the NVA. Swain’s right calf was gone, blown away by the RPG, and the smaller bone in his leg was snapped. “The tail end of the rocket slid underneath my ankle and took everything out except my Achilles tendon,” Swain said. “My foot was just hanging by a tendon.” He knew if Howard tried to stand to carry him out, he would be shot and killed.

​Lieutenant Jaeger was on the radio, calling for air support as soon as the enemy attack commenced. He spotted a wounded Vietnamese Hatchet Force man lying some twenty yards away, so he raced without hesitation through a hail of bullets to help administer life-saving aid. Jaeger was then notified that his subordinate Lee Swain had been badly hit. He ran more than forty yards across the field under heavy fire to check his condition and found that Swain’s right leg was hanging only by tendons. The left leg was also torn by shrapnel and was bleeding profusely. Jaeger removed his belt, fashioned a tourniquet around Swain’s left leg, and called back for a medic.

​Joe Parnar advanced on the double with his buddy Steve Roche, noting many Montagnards firing into the surrounding jungle as explosions went off all around them. Parnar spotted Howard lying on the ground, helping to administer to Lieutenant Swain. “His foot was blown off cleanly at the ankle and attached to his leg only by the Achilles tendon,” Parnar said. “The other leg looked as if a giant hand had ripped out a chunk of his calf, exposing the tibia and fibula bones.” Parnar was equally shocked at the site of the exposed white bones as he was with the fortitude Swain was maintaining under such incredible duress. “He was lying on his stomach with his chin resting on his crossed wrists and saying to Bob Howard that this would take care of his pheasant hunting.”34

​Parnar tried to reassure the officer. “Don’t worry, sir, you’re going to do a lot of pheasant hunting.”

​Parnar put a tourniquet on Swain’s right leg as the officer was given morphine. Jaeger immediately got on the radio and called for a medevac chopper. He then crawled to a position close to Howard and lay there calling in air strikes against the NVA massing to their south, east, and west. The enemy was strongest on their southern perimeter, so Jaeger called for one of the A-1Es to lay down ordnance particularly close. “He got it within twenty-five yards of our southern perimeter and really took out a lot of bad guys,” Jaeger said.35

​The bomb cluster fragments that stripped branches from trees tore through the flesh of several Hatchet Force men as well. Howard and Parnar were both hit as they continued to work on Lieutenant Swain. Parnar attempted to brush a burning fragment off his right calf but found that the metal had penetrated into the muscle. One of the indigenous troops from Lloyd O’Daniel’s Montagnard camp platoon cried out for a doctor in Vietnamese as blood poured from his head wound.

​Parnar finished putting a large combat dressing around Swain’s nearly severed ankle, then used another to tie around Swain’s boot, running up his calf, to help hold the dangling foot in place. As he completed his makeshift medical treatment, O’Daniel’s wounded Montagnard was escorted to him, trying to clutch a large flap of skin hanging from the right side of his face off his jaw. As Parnar applied a combat dressing to hold the man’s face together, another Montagnard summoned him to where an American lay wounded. Parnar directed an indigenous trooper to help his wounded friend maintain pressure to the dressing on his face before grabbing his M16 to head into the jungle where Sergeant Lee Dickerson lay in a small grove of bamboo.

​Dickerson had been hit by enemy fire as he and his platoon leader, First Lieutenant Bob Price, were advancing across the field a short distance from Swain and Howard. Price had also been wounded, but he managed to help treat Dickerson and help drag him closer to safety. Parnar found that the sergeant was still lying exposed out beyond the company’s defensive perimeter. He, the Montagnard, and Price grabbed Dickerson and carefully dragged him back to the perimeter as machine-gun bullets thumped into the jungle floor all around them. Parnar administered first aid and dressings to Dickerson’s chest wound before moving back to attend to other wounded men.

​Lieutenant Jaeger called for a medevac chopper to remove the most seriously wounded but his SLAM company remained under enemy attack during the ninety minutes it took for help to arrive. Sergeant O’Daniel, finding his platoon pinned down at one point by an NVA machine gun, picked up a light anti-tank weapon, charged toward the bunker, and killed all four North Vietnamese within. Joe Parnar spent that time treating the wounded, giving Lieutenant Swain another shot of morphine as his level of pain spiked.

​The medevac choppers could not come soon enough for Swain or Parnar.

Footnotes for this section:

Previous THE SILENT SERVICE
Next STRIKE: Operation Medusa: The Furious Battle That Saved Afghanistan From the Taliban.