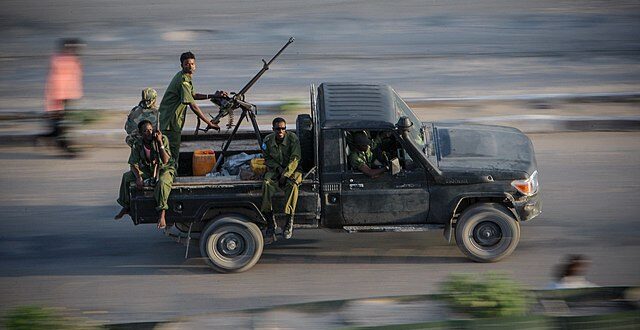 Soldiers with the Somali National Army.

US Military Launches Airstrike Against al-Shabaab in Somalia

The U.S. military says it has carried out an airstrike against members of the al-Shabaab extremist group in Somalia.

A statement by the U.S. Africa Command on Saturday describes the airstrike as being carried out Thursday in “collective self-defense” and at the request of the Somali National Army near the town of Cadale in the Middle Shabelle region.

“In support of the Federal Government of Somalia’s ongoing operations against al-Shabaab, U.S. Africa Command conducted a collective self-defense strike against al-Shabaab terrorists who were attacking Somali National Army forces near Cadale, Somalia, on Nov. 3, 2022” the command said in a statement.

“The command’s initial assessment is that the Somalia National Army-requested strike killed 15 attacking al-Shabaab terrorists and that no civilians were injured or killed,” the command said.

Separately, the Somali National Army and local clan militias say they have killed at least 100 militants as retribution for last Saturday’s terrorist bombings that killed more than 100 people in Mogadishu.

Al-Shabaab is the largest and most kinetically active al-Qaeda network in the world, according to the U.S. military.

The U.S. has carried out dozens of drone strikes against extremists in Somalia in recent years.