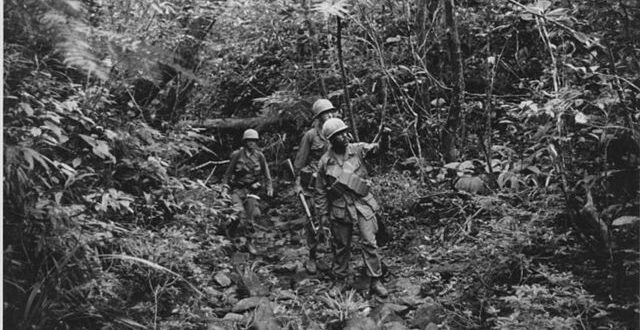 The soldiers proceeded cautiously through the jungle highlands west of Pleiku, near the Cambodian border, on the morning of May 18, 1967. The men were part of Operation Francis Marion, aimed at stopping the North Vietnamese Army (NVA) from seizing the Ia Drang Valley. The Americans belonged to B Co., 8th Inf., 1st Bde., 4th Infantry Division. Most were young, and many were new to Vietnam. But they all were about to become seasoned warriors, via a series of savage battles known simply as “The Nine Days in May Border Battles.”

By the end of those nine days, some 2,000 GIs would go up against 1,500-2,000 regulars of the NVA’s 32nd and 66th regiments. The enemy would attack in groupings that vastly outnumbered the Americans. Three men from the 4th Infantry Division would earn posthumous Medals of Honor. The 1st Brigade would earn a coveted Presidential Unit Citation for heroically disabling two full enemy regiments and curtailing an entire season’s offensive.

Ordeal of B Company

As outlined in the after action report for May 18-26, the five battles can be traced to 10:40 a.m. on the 18th, when a lone NVA soldier appeared before B Company, and then took off along a well used trail. Additional enemy soldiers popped in and out of view, until the acting company commander, 1st Lt. Cary Allen, dispatched his men into action.

Two platoons quickly organized a perimeter as best they could within the dense jungle, while two others the 1st and the 4th set out to investigate. And the 4th Platoon soon sighted another NVA. GIs gave chase. “It was a decoy;” said John Barclay, who was an 18-year-old automatic weapons rifleman assigned to 1st Platoon. “It was a lure meant to draw them into a trap:’ It worked. The 4th Platoon quickly was surrounded and attacked.

“The rest of us tried to break through to them,” Barclay remembered. “But then we came under attack. We fought all afternoon. By around 4 p.m., we knew they weren’t coming back. In fact, they were being annihilated.”

Platoon Sgt. Bruce Grandstaff, 4th Platoon leader, fought valiantly to save his entrapped men. Time after time, he raced through enemy fire in order to help his wounded men, or to try to pop smoke grenades up through the jungle canopy to mark his position. Wounded first in one leg and then the other, Grandstaff called in increasingly closer artillery strikes.

Bleeding profusely from multiple wounds, he crawled forward until he was able to lob grenades atop an enemy machine gun emplacement. Finally, a desperate Grandstaff called in an artillery strike on his own position.

Ray Harton was then assigned to the 6th Bn., 29th Artillery. “I was told the platoon wanted artillery on top of them;’ he recalled. “I said, are you sure that this is what they want! Yes, put it on top of them: I immediately made a correction for C Btry., 5th Bn., 16th Arty, and fired many 155mm rounds on top of them.”

An enemy rocket took Grandstaff’s life. Later, he was awarded a posthumous Medal of Honor.

Only eight men lived through the attack on the 4th Platoon. The survivors then endured a gruesome ordeal, pretending to be dead while NVA kicked and looted American bodies, shooting anyone who showed the barest sign of life. One survivor later reported that an NVA actually sat on his back and shoved a hand down his shirt to see if he was still breathing.

The rest of B Company, meanwhile, continued to fight until it drove off the enemy. It sustained 10 KIA and 24 WIA. Recalled Barclay: “At the end of the day, I was amazed I had survived this horrible battle. It had just begun.”

By the next morning, B Company had been joined by the battalion’s A and C companies, plus the Reconnaissance Platoon from HQ Company. Members of A Company found what was left of the 4th Platoon, and spent much of the day helping to care for the casualties.

Action resumed on the 20th, after the 1st Brigade set up a defensive perimeter at a new site. “We had put up a low rock wall between two trees as protection;’ recalled Kent Combs, who was a 20-year old with the Recon Platoon. “Sometime after dark we started taking mortar fire, followed by ground attacks:’

Earlier that evening, Combs had talked to a friend from C Company, P. Leslie Bellrichard: “He was leaning against a tree, reading his Bible.” When the attack was in full swing, with the Bible safely stowed away, Bellrichard repeatedly rose from his foxhole to throw grenades into the midst of charging NVA.

During one such attempt, Bellrichard was knocked backward by an exploding mortar round. When his armed grenade slipped out of his hand and into an occupied foxhole, Bellrichard threw himself atop the grenade, using his own body to absorb the explosion. Mortally wounded, he still managed to fire into attacking NVA before succumbing to his wounds. The action cost Bellrichard his life, and also earned him a Medal of Honor.

Another Medal of Honor was earned that night by Frankie Molnar, a 24-year old staff sergeant who saved the lives of his fellow soldiers when he threw himself on a live enemy grenade.

The companies fended off the three wave assault that engulfed their night defensive position. In two hours of fighting the GIs lost 10 KIA and 65 WIA. The 3rd Battalion of the 12th Infantry provided a backstop, preventing the NVA from retreating to its sanctuary in off limits Cambodia.

Another fierce assault came on May 22, when the enemy sent human waves against A and B companies. “Heavy close in fighting raged for four hours until the enemy force finally broke contact and exfiltrated from the battlefield;’ reads the brigade’s Presidential Unit Citation.

Fierce fighting continued on the 24th and 26th, involving elements of the 3rd battalions of both the 12th and the 8th infantries.

Richard Jackson was a medic assigned to C Co., 3rd Bn., 8th Inf. “Doc” Jackson was on patrol with his unit on May 26 when he stopped for a “nature call.” From the corner of his eye, Jackson saw a slight movement a shadow, perhaps, shifting position. He alerted his unit members. Then, as Jackson described it: “All hell broke loose.”

“That firefight was so intense, and the noise so deafening that it made you strain to keep your senses,” Jackson recalled. “Enemy fire was slamming into our position like rainfall.”

Jackson immediately went to work. “I was taking care of the wounded and seeing my guys get killed on a scale that was overwhelming,” he said. When Jackson himself took a hit, he pressed onward. “I continued to weave my way through the carnage to get to whomever I could.”

Jackson recalled hearing his platoon sergeant shout repeatedly for his soldiers to keep the enemy at bay. The Americans did as their sergeant asked.

The same can be said of the entire brigade. As stated in the Presidential Unit Citation: “The combined fortitude, determination and unwavering courage of the 1st Brigade’s personnel rendered two North Vietnamese Army regiments ineffective and totally disrupted the 1967 summer monsoon offensive in the Central Highlands.”

A battle survivor added this perspective. “We weren’t a high profile group,” said Landis Bargatze, who was assigned to A Co., 3rd Bn., 8th Inf. “We weren’t Special Forces or Airborne. We were mostly just a bunch of draftee grunts who turned out to be damn good soldiers.”

Susan Katz Keating is the publisher of Soldier of Fortune Magazine.

Previous Arrest in Istanbul Bomb Attack as Turkey Slams US
Next Did Your Tank Flip Upside Down? Here’s How to Get It Back on Track