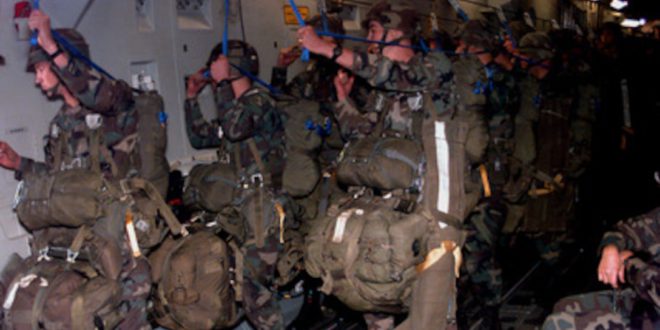 Soldiers from the 82nd Airborne line up to parachute Sayram, Kazakhstan. DOD

Background: From President of the Republic of Kazakhstan

Currently, the counter-terrorist operation continues in our country. Large-scale and well-coordinated work is being carried out by the police. The National Guard and the armed forces to restore law and order in accordance with the Constitution. I ordered to launch a counter-terrorist operation to eliminate the national security threat and to protect lives and properties of the citizens of Kazakhstan.

The analysis of the situation showed that Kazakhstan is facing an armed act of aggression well prepared and coordinated by perpetrators and terrorist groups trained outside the country.

Peacekeeping troops comprising of multinational forces of CSTO member states were deployed and will remain for the short period of time until the stabilization of the situation in Kazakhstan.

I ordered the law enforcement agencies to form an investigative group in order to reveal the root causes of the situation that led to the armed act of aggression and bring to justice those who broke the law.

On January 2, 2022, I instructed the Government to quickly respond to the concerns of the protestors in the Western Kazakhstan and to implement a package of measures to regulate the price of liquefied petroleum gas.407316616

Kazakhstan will continue to ensure safety and protection of the foreign diplomatic missions as well as personnel and properties of foreign companies and investors.

“The situation has stabilized in all regions of the country,” the office of Kazakhstan’s President Kassym-Jomart Tokayev said in a statement Sunday, after a week of unrest in which he directed security forces in a televised national address Friday to shoot to kill protesters without warning in the Central Asian nation.

During the week, Kazakh security forces killed 26 demonstrators and detained 5,800, the president’s office said Sunday. The statement from the presidency said “a substantial number of foreign nationals” were included among those detained. Update stated 164 were dead.

Almaty, Kazakhstan’s largest city, was mostly quiet on Saturday, according to Agence France-Presse, but security forces were firing warning shots if anyone approached the central square.

Also Saturday, authorities announced the arrest of Karim Massimov, former head of the National Security Committee, on suspicion of high treason. Masimov, 56, led the committee, which is responsible for counterintelligence, until Tokayev removed him earlier this week.

The mostly Russian troops began arriving in Kazakhstan after Tokayev declared a state of emergency Wednesday and appealed to the Collective Security Treaty Organization, a Eurasian intergovernmental military alliance, for help quelling the protests.

About 2,500 troops are being deployed, some guarding government buildings in the capital, Nur-Sultan, freeing up “part of the forces of Kazakh law enforcement agencies [to] redeploy them to Almaty to participate in the counter-terrorist operation,” said a statement from Tokayev’s office.

The CSTO is made up of forces from Russia, Belarus, Armenia, Kazakhstan, Kyrgyzstan and Tajikistan.

Tokayev told Russian President Vladimir Putin in a phone call Saturday that “terrorist” attacks are still being carried out in some areas of his country, despite the clampdown, according to a statement on the Kazakh presidential website.

The Kremlin described Saturday’s conversation as lengthy, during which Tokayev described to Putin the unrest, “noting that it is developing towards stabilization.”

Tokayev dismissed international calls Friday for his government to negotiate with the protesters. He continues to claim, without evidence, they are trained and organized by unnamed foreign entities.

He called the protesters bandits and terrorists who must be destroyed and promised this would be done shortly. He also thanked Putin for promptly sending troops, at Tokayev’s request, to help crack down on the protests.

“The presidents exchanged views on the measures taken to restore order in Kazakhstan” and agreed to remain in “constant” contact, the Kremlin statement said.

Protests broke out in Kazakhstan late last week over fuel prices and escalated into widespread violence.

The U.S. State Department on Friday approved the “voluntary departure” of nonemergency U.S. government employees and their families from the U.S. Consulate in Almaty and warned that the situation in Kazakhstan could affect the U.S. Embassy’s ability to provide assistance to U.S. citizens departing the Central Asian nation.

Secretary of State Antony Blinken said the United States was “very concerned” about the state of emergency in Kazakhstan.

“We’re watching the situation with real concern, and we are encouraging everyone to find a peaceful resolution,” he said.

NATO Secretary-General Jens Stoltenberg also called Friday for an end to the violence in Kazakhstan.

Chinese President Xi Jinping praised Tokayev on Friday for having “decisively taken strong measures at critical moments and quickly calming down the situation,” and referred to the violence by protesters as a “large-scale riot.”

China has invested heavily in Kazakhstan, which is a crucial part of Beijing’s Belt and Road initiative project connecting China to Europe.

Feng Chongyi, an associate professor in China Studies at Sydney’s University of Technology, told VOA’s Mandarin service that China is “very worried about spillover effects” from the Kazakhstan violence, which could encourage citizens in Kazakhstan’s neighbors, or even Chinese citizens, to rise up against their government.

He also noted that while China and Russia often work together on the international stage against the United States, they also have their own conflicts with each other, which he said could flare up over the violence in Kazakhstan. He said if Kazakhstan moves closer to Russia as a result of the current situation this would pose a threat to China’s interests.

VOA’s Mandarin Service and Ricardo Marquina contributed to this report. Some information came from The Associated Press, Reuters, and Agence France-Presse.

Previous Texas Army won the battle at San Jacinto in 18 minutes: Texas gained independence from Mexico.
Next THE DEATH OF CHE GUEVARA: