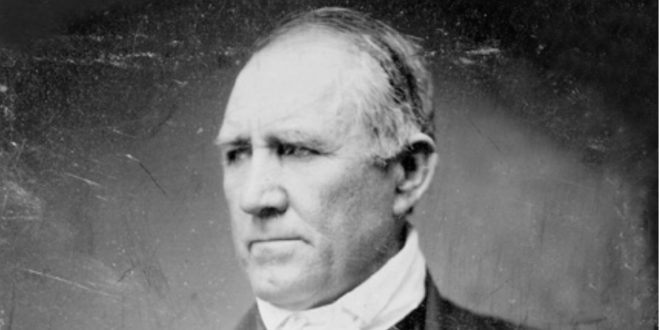 Sam Houston served in the U.S. House of Representatives and as governor of Tennessee when he moved to Texas in 1832. At the time he arrived, Texas was part of Mexico and the site of rising tensions and violent disturbances between Mexican authorities and Anglo settlers from the United States. Voicing his support for a separate state of Texas, Houston emerged as a leader among the settlers. In 1835, he was chosen commander in chief of the Texas army.

The Alamo was an 18th century Franciscan Mission in San Antonio, Texas, which was the location of an important battle for Texans fighting for independence from Mexico. In 1836, a small group of Texans was defeated by Mexican General Santa Anna.

Mexican General Antonio López de Santa Anna Recaptured the Alamo
March 6, 1836
In 1836, a small band of Texans fought the Mexican Army from inside an old mission chapel known as the Alamo. Texans fighting for independence from Mexico had seized the structure and sent Mexican troops away from San Antonio the previous December. Colonel James Bowie and Colonel William B. Travis commanded the small force defending the Alamo, including the famous backwoodsman Davy Crockett.

The Mexican army, led by General Antonio López de Santa Anna had been ordered to recapture the Alamo and take no prisoners.

On the morning of March 6, 1836, General Santa Anna recaptured the Alamo, ending the 13-day siege. An estimated 1,000 to 1,600 Mexican soldiers died in the battle. Of the official list of 189 Texan defenders, all were killed.

When Houston received word of the defeat at the Alamo, he launched a month-long retreat to regroup and replenish the Texas army’s strength. Remembering how badly the Texans had been defeated at the Alamo, on April 21, 1836, Houston’s army won a quick battle against the Mexican forces at San Jacinto and gained independence for Texas

Sam Houston, as commander of the Texas Army, led 800 troops in a surprise attack on Santa Anna’s 1,600 men. Shouting, “Remember the Alamo!” the Texas Army won the battle at San Jacinto in 18 minutes and secured Texas independence from Mexico. Texas remained independent for nearly 10 years, becoming a state in 1845.

The Republic of Texas achieved its independence from Mexico in 1836, the same year as the famous siege of the Alamo in which pioneers Jim Bowie and Davy Crockett were slain. The “Lone Star State” was the 28th state to join the Union, admitted in 1845. The name Texas is a Spanish name, which comes from an Indian word meaning “friends” or “allies.” Texas is the second-largest state in the Union in area, after Alaska. Although it has a wild, frontier history, today Texas is a major producer of oil and has important centers of industry and finance. A Texas state historian has said that the state flower, the bluebonnet, “is to Texas what the shamrock is to Ireland.”

Soon after independence, Houston was elected president of the Republic of Texas. He continued to serve as senator and governor after Texas became part of the United States in 1845.

More than 60 Confederacy and its military men have been taken down all across America — from San Diego to Raleigh, N.C.— since the death of George Floyd. Many have been removed in medium- to large-size cities, according to a tally reported by NPR based on The AP

Sam Houston died in 1863 in Huntsville, Texas, where a 67-foot-tall memorial statue of him now stands. After a lifetime of service to his country, the event for which he is most well known is his role in the independence of Texas.

Previous The Battle of San Jacinto: Eighteen Minutes that Changed the World, 21 April, 1836
Next 5,800 Detained in Kazakhstan “Counter Terrorist” Operation Against Protestors