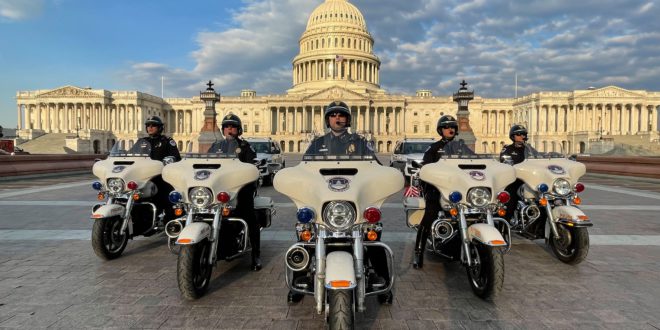 Biden on high alert for “Domestic Terrorists,” reinstalls fence round Capitol for State of the Union Address

Speculation is that he is concerned about the Freedom Convoy’s truckers who might come and honk and get rowdy at the Capitol.

“Law enforcement agencies across the National Capital Region are aware of plans for a series of truck convoys arriving in Washington, DC around the time of the State of the Union. As with any demonstration, the USCP will facilitate lawful First Amendment activity. The USCP is closely coordinating with local, state and federal law enforcement agencies, including DC’s Metropolitan Police Department, the United States Park Police, the United States Secret Service and other allied agencies to include the DC National Guard.” – The United States Capitol Police

Focus. Threats against the Capitol and Members have shifted dramatically, both in volume and nature. Today’s threats are not only more numerous but increasingly come from domestic elements. Individuals and groups advocating extremist views actively use the internet to propagandize, recruit, radicalize, and organize political violence such as the Capitol Attack. Some also target Members with threats of violence. The USCP is not postured to track, assess, plan against, or respond to this plethora of threats due to significant capacity shortfalls, inadequate training, immature processes, and an operating culture that is not intelligence-driven.

The breach of the U.S. Capitol on January 6 brought into stark relief the need to immediately improve the security of the Capitol Complex and the security of Congressional Members and staff. Immediate action is therefore required:•

The Congress must immediately fund infrastructure contracts managed by the Architect of the Capitol to repair or replace doors and windows, authorize mobile fencing design and procurement, and authorize U.S. Army Corps of Engineers’ assessment of long-term improvements to perimeter fencing and security surveillance and sensing systems.

•The Congress and the Capitol Police Board must immediately amend relevant statutory and internal Board policies to better enable crisis decision-making and empower the USCP Chief to initiate timely augmentation in emergencies.•

The Capitol Police Board must immediately approve the U.S. Capitol Police Chief’s outstanding request for security augmentation from the National Guard.•

The Congress must direct the USCP to take immediate action to eliminate personnel shortfalls, currently 233 officers, through enhanced recruiting and incentive programs.•

The Congress must immediately authorize a USCP force structure increase and National Terrorism advisory reinforced the fear of elected officials who fear for their lives. As required, the Capitol police pursuant to an emergency declaration in place, requested the two month extension.

System.• The Congress must immediately authorize appropriations to enable the Sergeants at Arms to procure security systems for all Member district offices and residences; this includes appropriations for design and procurement of technologies and software applications to improve coordination for Member security needs. For the full report Here

Today, US Capitol Police Acting Chief Yogananda Pittman formally asked the Department of Defense to extend the support provided by the National Guard to remain at the Capitol beyond March 12th.

Wednesday, Acting Chief Pittman testified to the House Legislative Branch Subcommittee that threats to members are up 93% during the first two months of this year compared to last year. The Department takes its mission seriously and will do whatever is necessary to achieve that mission. The USCP is extremely grateful for the Department of Defense and the National Guard support provided since January 6th. We understand the Guard has a tremendous service need back home responding to the COVID-19 pandemic.

“The United States Capitol Police Department is aware of and prepared for any potential threats towards members of Congress or towards the Capitol complex. We have obtained intelligence that shows a possible plot to breach the Capitol by an identified militia group on Thursday, March 4. We have already made significant security upgrades to include establishing a physical structure and increasing manpower to ensure the protection of Congress, the public and our police officers.

“Our Department is working with our local, state, and federal partners to stop any threats to the Capitol. We are taking the intelligence seriously. Due to the sensitive nature of this information, we cannot provide additional details at this time.

The who said, who failed, who acted or didn’t act blame game continues for the breach by rioters on 6 January.

BACKGROUND “I was pleased to meet with Lieutenant General (ret) Russel Honoré today to be briefed on his initial assessment of the security review he is conducting of the US Capitol Complex initiated in the wake of the Jan. 6 assault,” Pelosi tweeted 28 January.

The full report from the Congress:

Speaker Nancy Pelosi today met with Lieutenant General (ret) Russel Honoré to receive an initial assessment of the security review he is conducting of the United States Capitol Complex initiated in the wake of the January 6 assault:

“Following the devastating attack on the Capitol that threatened the lives of and traumatized Members of Congress, staff and support workers, I asked Lieutenant General Russel Honoré to lead an immediate review of the security of the Capitol Complex,” said Speaker Nancy Pelosi.  “I salute the urgent, diligent and strategic work that he and his team continue to do in this mission, which is critical to protecting the Capitol and, indeed, our very Democracy.  I was pleased to be briefed on the General’s initial assessment which covered operational readiness, interagency cooperation, security infrastructure and the morale and readiness of institutional staff.  As we consider the need for an emergency supplemental funding bill to meet institutional security needs, I want to thank the General for reviewing what is necessary for the Capitol Police to do their jobs.”

At the direction of the Speaker of the House, the Task Force is leading an immediate collaborative review, on behalf of the House Sergeant of Arms, of both the United States Capitol and the House Office Buildings in order to safeguard the Capitol, Members and staff.  The duration of this review is from January 22 through at least March 5, and its scope includes security infrastructure, command and control, interagency processes and procedures, and training and exercises.  The review will examine not only the safety of Members while in the U.S. Capitol Complex but their movements to and from Washington and in their districts.  The review will be completed in consultation with other federal law enforcement stakeholders and national security experts.

That all sounds good, but some analysts say hold on minute. This General cannot be impartial. Pelosi is not seeking impartiality. Some reports claim that the General has already made up his mind on the outcome of his investigation.

“That little peace of shit with his @Yale law degree should be run out of DC and Disbarred ASAP,” Lt. General Russel Honoré said about Hawley on Twitter on Jan. 11. The tweet was deleted, but Kansas City.com saved a screen shot of it in the report just quoting the General.

The General promotes the great conspiracy of 6 January, and has decided that the Capitol Police were complicit.

“Mr. Honoré has said in TV and radio interviews that the invasion was an inside job, that the Capitol Police force is “40% Trumpsters” and “gave way” to the protesters. “They had help inside that force,” he told digital show host Roland Martin, with Washington Times reporting.

“They were either that stupid or ignorant, or they complicit. I think they were complicit,” he said on MSNBC last month.

“Once this all gets uncovered, there were some complicit actions at the Capitol Police,” he said from his home in New Orleans, where he became famous for leading Hurricane Katrina military relief efforts in 2005.

He stated that Congresswoman Boebert, conservative Trump supporter. should be put on the No Fly List.

Many claim that he is hardly a choice that would investigate professional as he has already take the same premise as the bogus 2nd Impeachment: guilty until proven innocent regarding the Capitol police and Trump supporters. No wonder Pelosi chose him.

Others find it hard to believe that such a highly respected General is anything but a fair minded man.

More about the General, his LIFE & CAREER from his website promoting his books and speeches.

Prior to his command of Joint Task Force-Katrina – leading the Department of Defense response to Hurricanes Katrina and Rita in Alabama, Mississippi, and Louisiana – General Honoré served in a variety of command and staff positions which focused on Defense Support to Civil Authorities and Homeland Defense.

For four of the past six hurricane seasons, he supported the Department of Defense planning and response for Hurricanes Floyd in 1999; Lilli and Isidore in 2002 (both hit the Gulf Coast); Isabel in 2003; and Charley, Frances, Ivan and Jeanne in 2004.

General Honoré also planned and supported the United States military response to the devastating flooding which swept Venezuela 1999 and Mozambique in 2000. As Vice Director for Operations, he led the Defense Department’s planning and preparation for the anticipated Y2K Millennium anomaly. As Commander of SJFHQ-HLS under NORTHCOM direction, he planned and oversaw the military response to the Space Shuttle Columbia Tragedy and the DC Sniper Shootings. Additionally, General Honoré participated in three TOPOFF (Top Officials) exercises as well as the United Endeavor series of Homeland Defense exercises.

Go to Gen Honore website for much more including books, classes he teaches and interviews HERE

Previous Trudeau Crackdown: Convoy Organizer denied bail: Trucker Beaten by Police Speaks Out
Next Trudeau, Biden, Behind the scenes of the Freedom Convoy as Trudeau to announce end of Emergency Power Act?