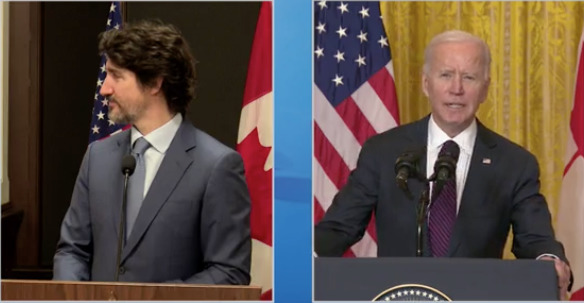 The White House was live. February 23, 2021 · Like Minds: President Biden and Prime Minister Trudeau give statements on their first bilateral meeting.

Trudeau, Biden, Behind the scenes of the Freedom Convoy as Trudeau to announce end of Emergency Power Act?

The two leaders agreed that the actions of the individuals who are obstructing travel and commerce between our two countries are having significant direct impacts on citizens’ lives and livelihoods.  The President expressed his concern that U.S. companies and workers are experiencing serious effects, including slowdowns in production, shortened work hours, and plant closures. The Prime Minister promised quick action in enforcing the law, and the President thanked him for the steps he and other Canadian authorities are taking to restore the open passage of bridges to the United States.

In turn, the Prime Minister thanked the President and his administration, the Governor of Michigan, and US officials for all of the assistance that the United States is providing to resolve this disruption.

The two leaders agreed to stay in close touch in the days ahead to ensure that the free flow of traffic is restored at these vital transit points.

One year ago, @POTUS Biden and I reaffirmed the special nature of the Canada-United States relationship. We also reaffirmed our commitment to standing together in the face of threats to democracy, growing the middle class, creating safer communities, and tackling climate change.

The Prime Minister, Justin Trudeau, today issued the following statement on the anniversary of the Roadmap for a Renewed U.S.-Canada Partnership:

“One year ago, Canada and the United States reaffirmed the special nature of our relationship, and our commitment to working closely together in the interests of the collective security and prosperity of our citizens based on the principles of democracy, diversity, and equity.

“The Roadmap for a Renewed U.S.-Canada Partnership guides our work, and lays out an ambitious framework to build a greener, more prosperous future; grow our economies and strengthen the middle class; combat the global COVID-19 pandemic; create safer, more equitable communities; and stand together in the face of threats to democracy.  Defending democracy is at the heart of our commitment to stand with Ukraine in the face of Russia’s unprovoked invasion.

“We have made progress over the past year and laid the foundation to deepen our cooperation on climate change, on supporting the global pandemic response efforts, on enhancing cooperation on the Arctic, and on building the economies of the future, including through work to strengthen bilateral supply chains and cooperation on critical minerals.

“Much work remains to be done. Our countries are both stronger when we work together towards our shared objectives. We look forward to building on our enduring partnership between our two great countries in the years ahead.”

Previous Biden on high alert for “Domestic Terrorists,” reinstalls fence round Capitol for State of the Union Address
Next OPERATION WOLVES BLANKET WRAPS UP TWELVE IN CHILD PREDATOR STING