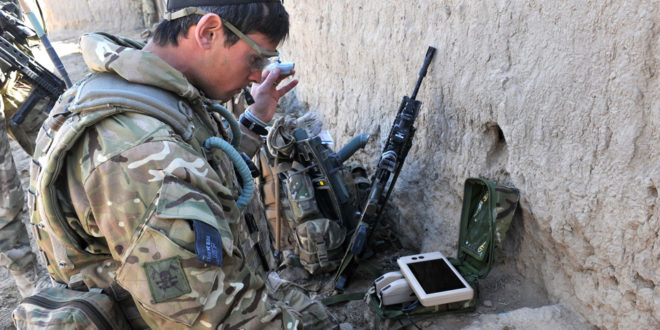 The “Black Hornet” miniature drones that were used by British troops in Afghanistan are headed for Ukraine. The move was announced as part of a military aid package from the United Kingdom and Norway that includes hundreds of tiny drones called Black Hornets. This is what the dragonfly-sized reconnaissance devices can do.

The Black Hornet system is designed to be worn by soldiers. It includes a screen that flips out from a vest, and a separate pouch containing two drones and a joystick-like controller. The drones can fly for up to 25 minutes, with around the same time needed for recharging. The system weighs 1.3 kilograms, while the individual drones are just 33 grams. A vehicle-mounted version is also available.

The miniaturized flying cameras are designed to approach enemy positions without being seen or heard, and transmit relatively low-resolution 640 x 480-pixel video to troops up to 2 kilometers away. The devices will allow Ukrainian fighters to “defend urban areas safely,” according to the U.K. government.

Black Hornets are also able to snap and transmit still photos of 1,600 x 1,200 pixels, and are equipped with basic thermal imagery to help identify enemy positions at night. The latest versions do not carry any digital storage in the aircraft, removing the risk of operational intelligence falling into enemy hands. Reported prices for the current versions of the micro drones vary widely, but they are said to have cost$94,000 per unit in 2013.

The harmless size of the drones means flights do not need to be coordinated with other air traffic, but the size comes with a significant disadvantage. A British soldier using an earlier, 16-gram version of the drone in Afghanistan in 2013 noted that “a good gust of wind will send the Black Hornet off.”

It’s been claimed that the newer, weightier versions are able to withstand gusts of wind of up to 28 kilometers per hour, but sustained strong winds would significantly reduce the usability of the drone.

Given the Black Hornets’ limited range and optics, the nano drones will be of little use in the long-range artillery duels seen on much of the front line in recent weeks. But the Black Hornets may be an effective tool for stealthy special operation groups, and in close-quarter urban-fighting situations.

Previous Russian Soldier in Kharkiv: ‘Everything is F*cked’ as Ukraine Forces Surround His Unit
Next Soldier of Fortune Visits a Master Knife Maker in Ukraine