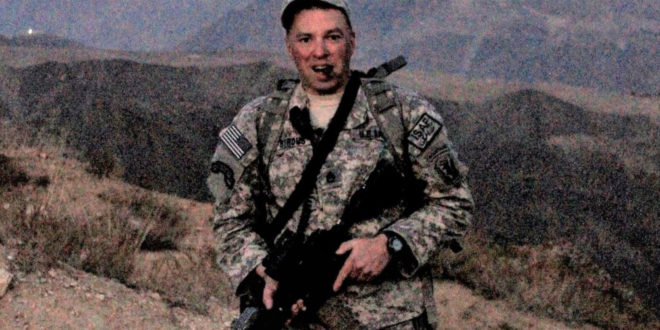 Retired Sgt. 1st Class Richard “Doc” Strous, who served 26 years and deployed three times with the National Guard, poses for a photo in Afghanistan’s Panjshir province during his deployment with the Vermont National Guard’s 86th Infantry Combat Team (Mountain) in 2010. Earlier this year, Strous was awarded the Silver Star, one of the military’s highest valor for his heroic actions as a medic with the 75th Ranger Battalion in Somalia during the Battle of Mogadishu in 1993.

ARLINGTON, Va. – It is said that medics never stand taller than when they kneel to treat the wounded.

As a combat medical specialist, Retired Sgt. 1st Class Richard “Doc” Strous embodied this sentiment throughout his career, which began with the 75th Ranger Regiment, and then went on to span three decades with the Army National Guard. Despite recently being awarded the Silver Star, one of the military’s highest awards for valor, and being depicted in “Black Hawk Down,” a bestselling book that went on to become an Academy Award-winning film, his focus was always on his duty as a medic.

“I just went out and did my job,” he said. “I never asked for the awards or the recognition. It was always about going out and doing the job that I needed to do.”

The job he needed to do occurred in during the Battle of Mogadishu in Somalia in October 1993 where 19 American Soldiers were killed and 73 wounded. Initially he was awarded the Bronze Star with V device for valor, but it was upgraded to the Silver Star this year.

“Strous, having already been wounded, exposed himself to enemy fire to rescue his wounded comrades,” reads the award citation. “Without his aid bag, he used every means possible to successfully stop the bleeding and stabilize the two wounded Rangers. Twice, he put himself into the line of fire to aid the wounded and twice he treated and stabilized the casualties. He exposed himself to hostile gunfire so others would be saved.”

Standards are what save lives, he said.

“In the Ranger Regiment it’s black and white,” said Strous. “You either meet the standards or you’re gone. I maintained standards and integrity, and there’s a reason for it. You’re dealing with somebody’s life. You have to do it this way or somebody might die.”

He took that mindset with him after finishing his initial enlistment with 3rd Battalion, 75th Ranger Regiment in 1994, when he decided to continue his service with the Army Guard. His hometown roots lead him back to Ohio where he joined the Ohio Army National Guard, before finding a long-term home in the Vermont Army National Guard’s 3rd Battalion, 172nd Infantry Regiment (Mountain) in 2000.

The mountain infantry battalion appealed to Strous because the unit’s camaraderie reminded him of the Ranger Regiment, he said.

“The great thing about the National Guard is you know who you’re going to deploy with,” said Strous. “That’s the reason I stayed in the National Guard for as many years as I did, because I knew their strengths and their weaknesses.” His skills and experience were quickly recognized and he served full time at the Infantry Training Company and then as an assistant instructor at the U.S. Army Mountain Warfare School, both run by the Vermont Army Guard at Camp Ethan Allen Training Site in Jericho. He helped run tactical courses and train units that deployed overseas to locations from Afghanistan to Kosovo. Despite the gravity of the training, Strous found ways to relate to Soldiers.

One recalled being entertained when hearing a familiar tune on the firing line and looking over to see Strous humming while he was demonstrating marksmanship techniques. He turned to her and simply said “Animanics,” naming the theme song he was humming, and then continued a barrage of center-mass target hits with his M-16.

In 2003, he switched gears from training other units to volunteering for a deployment to Afghanistan. He tried out and was selected for an Embedded Training Team comprised of Soldiers from Vermont’s mountain infantry battalion.

The mission was training the Afghan National Police and Afghan National army, a unique assignment for the unit, said Strous, adding it was typically a Special Forces mission.

However, he said, he felt just as confident deploying with the group of Vermont Army Guard members as he did with his Ranger unit, especially with the experience the noncommissioned officers brought with them.

“The great thing is that we had so many experienced NCOs who had 10 to 20 years in the Army,” Strous said. “We had former Army Rangers and special operators. As a National Guard unit, we were head and shoulders above what some regular Army units could do because they did not have the experience that we had,” he said.

During this deployment, Strous earned his second award of the Combat Medical Badge, awarded to medical personnel serving with a ground combat arms unit who “perform medical duties while the unit is engaged in active ground combat, provided they are personally present and under fire.”

After returning home from his second combat tour while still on terminal leave, he volunteered for another deployment. This time, he went to Kuwait to serve as the senior medic for the security NCO at Camp Virginia, where he helped develop the camp’s mass casualty response plan.

In 2006, he returned to his roots at the mountain warfare school. Later, due to his medical and mountaineering credentials, Strous was selected to run a Combat Lifesaver Course for the newly formed 86th Infantry Brigade Combat team’s upcoming deployment to Afghanistan.

That summer, he trained more than 300 Soldiers. The course required Soldiers to insert an intravenous injection into a live patient, transport mannequins standing in as simulated casualties, and tactically perform medical tasks in battlefield simulations. He also incorporated gallons of moulage (fake blood), simulated gunfire and explosions, and time limits to simulate combat stress.

“You do this properly or you’re gone. That’s the way the Ranger Regiment was and it influenced how I ran my Combat Lifesaver Course,” said Strous.

His third deployment to Afghanistan in 2010 was with the Soldiers he trained in the 86th IBCT. On the ground, he taught medical and tactical skills to Afghan National Security Forces.

“I drew on my whole background,” Strous said. “I worked as a medic. I worked as an armorer, as the radio guy. I wore multiple hats. That’s why they liked having me on the team.”

After that deployment, he returned to traditional, part-time Guard status while working on a Bachelor’s in Integrated Studies of History and Education, which he finished in 2016.

“That’s my passion – history,” he said, pointing out that his current desk is a World War II field desk with a plaque that dates back to 1943. “What do NCOs do? We maintain tradition; and what is tradition, but history?”

“He [Broich] said, ‘we need to suck all that knowledge out of your head before you retire,’’ Strous said, recalling the conversation.

Passing that knowledge to young NCOs at the RTI seemed a good way to end his career. In many ways, it’s what he had been doing wherever he served.

Receiving the Silver Star was a capstone moment, he said, but it isn’t what he reflects most upon in his nearly 30-year service.

“It is a point of pride, but looking back there are so many more things I did that I can be proud of,” he said. “I remember the individuals that have come up to me years later and say, ‘Doc, I still remember what you taught me.’ They remind me of why I do what I do.”

Previous Navy Ensign Herbert C. Jones, one of 2,400 Americans who died in Pearl Harbor Attack
Next Battle of Mogadishu: Blackhawk Down: Recollections, plus: The untold story