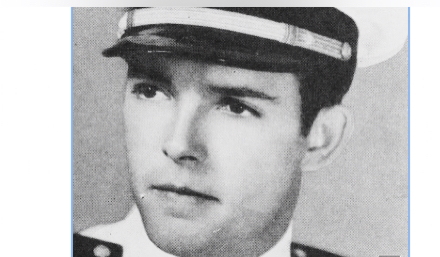 The 1941 attacks on Pearl Harbor, Hawaii, killed more than 2,400 U.S. personnel and thrust the U.S. into World War II. Many of the service members who died that day were heroes. One of those men was Navy Ensign Herbert C. Jones.

Jones was born Jan. 21, 1918, and grew up in Los Angeles, California. His father, Herbert A. Jones, was a Navy captain, which may have inspired the younger man to join the Naval Reserve in 1935 when he was only 17.

Jones completed two years of college before receiving his midshipman’s training. He was then commissioned as an ensign on Nov. 14, 1940, and sent to join the battleship USS California at Pearl Harbor. His fiancee, Joanne, eventually joined him, and they married the following summer.

Jones was still stationed on the California on Dec. 7, 1941, when the island was attacked. Pearl Harbor’s Battleship Row, where the ship was moored alongside many others, became the prime target of the Japanese. Like many other ships that day, the California’s commanding and executive officers weren’t aboard since the night before was a liberty night for many.

Jones had just relieved the junior officer of the deck and had begun his duties when the raid started. Quickly, the ship was hit by two torpedoes. In the first few minutes of the attack, Jones rescued a sailor from a smoke-filled compartment and led an anti-aircraft battery in firing on Japanese planes, according to the National World War II Museum.

When Jones realized a torpedo had damaged the mechanical hoists that load ammunition to the ship’s antiaircraft gun battery, he led a group of men on a mission to manually supply the ammo.

Jones and the other men were on the third deck passing ammunition up ladders to the battery — each piece was 5 inches long and weighed about 50 pounds — when a bomb exploded on the second deck. The young officer was severely injured by the explosion, which plunged the third deck compartment — where the men were — into smoke-filled darkness.

The ship began to flood from the damage. When a large, drifting mass of burning oil from other ravaged ships threatened to set the California on fire, the order went out to abandon ship. Two men tried to drag Jones out of the fire-filled compartment, but he refused, fearing more for their lives than his own. The 23-year-old reportedly said to them, “Leave me alone! I’m done for. Get out of here before the magazines go off.”

Jones’ actions inspired the men around him, including Marine Corps Pvt. Howard Haynes, who was awaiting a misconduct discharge and had been confined on the ship before the attack. A remorseful Haynes later told one of his superiors that he was alive because of what Jones did.

A few days after the attack, the California settled on the bottom of Pearl Harbor; however, parts of the upper deck were still above water. The ship was raised a few months later and underwent repairs that weren’t completed until January 1944.

In March 1942, Jones posthumously received the Medal of Honor for his bravery and sacrifice. Navy records show he was one of 15 sailors to have earned the nation’s highest honor at Pearl Harbor; only five of them survived the day.

Jones was one of nearly 100 men from the USS California who died at Pearl Harbor. He is buried beside his parents in Fort Rosecrans National Cemetery in San Diego.

In 1943, the destroyer escort USS Herbert C. Jones was launched in his honor. His widow, Joanne, christened the ship, which spent much of the rest of the war serving off the coast of North Africa and Italy.