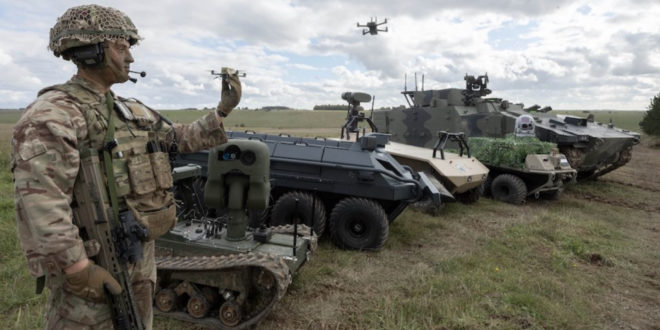 British Army unveiled ‘Future Soldier’ , its most radical transformation in over 20 years.

The British Army has unveiled ‘Future Soldier’ , its most radical transformation programme in over 20 years.

“Future Soldier is reinforced by the ambition outlined in the Defence Command Paper to transform the Army into a more agile, integrated, lethal, expeditionary force.

“We have underpinned this generational work with an extra £8.6-billion for Army equipment, bringing the total investment to £41.3-billion.

“Our Army will operate across the globe, equipped with the capabilities to face down a myriad of threats from cyber warfare through to battlefield conflict.”

“This will make us leaner, more agile and adaptable. Future Soldier is about ensuring the British Army is a competitive and resilient organisation able to meet the challenges of modern warfare.”

One of the most significant changes is the creation of a new Ranger Regiment. Standing up from 1 December 2021, the Regiment will embody the Army’s new expeditionary posture. It will form part of the newly established Army Special Operations Brigade and will be routinely deployed alongside partner forces around the world to counter extremist organisations and hostile state threats.

This shift to a globally engaged posture will mean more personnel are deployed for more of the time, with a new network of Land Regional Hubs based on existing training locations in places such as Oman and Kenya.

The Ranger Regiment’s cap badge will take its inspiration from the Peregrine Falcon and everyone will wear a metal badge, irrespective of rank.

Another key pillar of Future Soldier is ensuring the Army is a central contributor to NATO warfighting by delivering a fully modernised warfighting division by 2030, with capabilities designed to detect and defeat at greater range and accuracy.

New equipment such as Ajax, Boxer, Challenger 3, AH-64E Apache, long range precision fires and un-crewed aerial systems will be introduced, while much of the fighting force will fall under new self-sufficient Brigade Combat Teams.

To ensure land forces adapt at a rapid pace to challenge future threats, a new Experimentation and Trials Group will be established in 2022, leading on trialling new technologies and integrating them into how soldiers will fight and operate. The Army will also benefit from a significant share of the £6.6-billion R&D investment.

The Army will see some restructuring and reorganisation of units over the next four years, which will be supported by a rebalancing of personnel across the United Kingdom. The Regular Army will stand at 73,000 strong by 2025 and combined with an Army Reserve of 30,000, the British Army will stand at over 100,000.

The proportion of the Army based in Wales, Scotland and Northern Ireland will be sustained or increased by 2025, and this will be reinforced by around £3.35-billion from the Defence Estate Optimisation budget and a further £1.2-billion of Army investment in remaining sites.

Scotland will be home to more units and a greater proportion of the Army’s workforce than today. Glencorse Barracks in Edinburgh will be retained, while Kinloss and Leuchars will continue to grow. The £355-million investment in the Army estate will deliver over a £1-billion of economic benefits to Scotland.

The number of soldiers in Wales is set to increase with the return of the ‘Welsh cavalry’, The Queen’s Dragoon Guards, and a new Reserve company of The Royal Welsh established in North Wales. The retention of Brecon and growth in Wrexham locations are part of a £320-million investment.

Northern Ireland will keep the same number of Army units but host a greater proportion of the Army’s workforce.

Reservists will play a pivotal role in the modern Army, taking principal responsibility for Homeland Protect and Resilience operations.

In terms of warfighting we’ve reinforced NATO’s Allied Rapid Reaction for core established new Brigade Combat Teams and reinforce the Army’s Global Response Force. Over the next five years implementation will continue a-pace. The end of this year our new Ranger Regiment will reach initial operating capability by mid-2022 our new deep Recce strike brigade combat team will be established by the autumn of next year two battalions of the Mercier regiment will merge to form a new boxer mounted battalion in one of our armoured combat teams.

The recapitalization of major equipment is already underway. I’m determined to do everything within our means to accelerate the introduction of Challenger three tank with an ambition for the delivery to unit starting in 2025 onwards. Likewise, we are transitioning to boxer armoured personnel carriers from the retiring warrior with units starting to receive their first vehicles from 2023. We are resolving development issues with the troubled and nonetheless technically capable, however, Ajax armoured reconnaissance vehicle and we are upgrading the battle proven Apache attack helicopters while investing in everything from long range precision strike, Ground based air defence, un-crewed aerial systems, electronic warfare and tactical cyber. These cutting edge capabilities will be wielded by the newly restructured Brigade Combat Teams – self-sufficient tactical formations with their own combat support and logistics. They will include 16 Air Assault Brigade Combat Team and a new Aviation Brigade Combat Team, which together will form our Global Response Force providing defence’s rapid response for crisis overseas. Let me now turn to our plans to streamlining the army structure. For too long, historic infantry structures have inhibited our army’s transformation. We cannot afford to be slave to sentiment when the threat has moved on. So today I can confirm a major reorganisation under four new administrative divisions of infantry, the Queen’s division, the Union division, the Light division, and the Guards and Parachute division. These divisions are designed to reflect historic ties, while also balancing their number of battalions and unit roles, offering greater flexibility and opportunity for soldiers of all ranks.

As announced in March these plans do not involve the deletion of any cap badges or further major unit changes or any military redundancies. While we are significantly reducing the total number of army personnel. We are not compromising our presence in and contribution to the devolved nations. Our numbers will reduce slightly everywhere except Wales where we are increasing a portion of army based in each nation and investing millions in the defence industry and estate. Northern Ireland will keep the same number of battalions but host a greater proportion of the Army’s workforce and gain an additional reserve company of the Royal Irish.

Scotland will be home to more battalions going from six to seven units. And a greater proportion of the army than today. We will be retaining Glencorse barracks and we will grow in Kinloss and Leuchars thanks for 355 million pounds investment in the army estate. Wales will see the return of the Welsh Calvary Queen’s Dragoon Guards to Caerwent barracks and the new reserved company of Third Battalion the Royal Welsh to be established in north Wales. The retention of Brecon barracks and the growth of Wrexham are just part of a 320 million pound investment in the army estate in Wales.