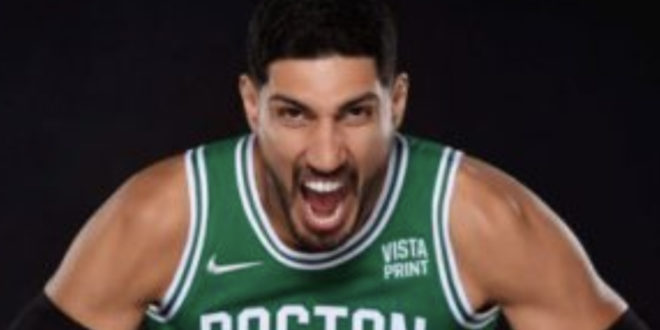 Boston Celtics center Enes Kanter is legally changing his name to Enes Kanter Freedom, @TheAthletic@Stadium learned. Kanter will be his middle name, Freedom is his new last name. He becomes a U.S. citizen on Monday.

Freedom is of Turkish ethnicity born in Switzerland.

And he’s been very vocal on calling out China’s human rights abuses.

“Xi Jinping is a control freak! The Chinese government’s surveillance tech is creating a database about everyone, monitoring everyday life demanding loyalty to the party silencing anything & anyone they consider a threat. This digital authoritarianism is a threat to democracies,” he tweeted.

“Move the Olympics for Peng Shuai’s Sake!!! It’s time for us to WAKE UP and SPEAK UP!! All the gold medals in the WORLD aren’t worth selling your morals, values and your principles,

Perhaps he is unaware of Fauci’s role?

And then there are the Skeptics who aren’t buying it considering his BLM, …..other woke agendas.

Eneshttps Kanter, NBA But his family returned to his family’s native Turkey when is father, Mehmet Kanter, became a professor of histology and genetics at Trakya University. Enes’ mother was a nurse and he has three younger siblings. One of his two brothers, Kerem, played college ball at Xavier. At 17 years of age, Enes moved to the United States to play high school basketball and played for one year at Stoneridge Preparatory School in Simi Valley, California. Kanter credits the television shows SpongeBob SquarePants and Jersey Shore for helping him learn English. He is a big fan of pro wrestling. In the summers, Kanter travels the country hosting youth basketball camps. To learn more about Kanter check out @eneskanter11 on Instagram and @EnesKanter on Twitter. Before being drafted by the Jazz in 2011, Enes Kanter played nine games for the Turkish Fenerbahce squad during the 2008-09 season. He was 16 years old at the time. Through those nine games, he appeared in both Turkish League and EuroLeague contests. He averaged 2.7 points and 4.2 rebounds per game. Later, he attempted to play collegiate basketball with Washington and then Kentucky, but he was deemed ineligible by the NCAA due to his Fenerbahce experience. Despite his lack of collegiate experience, Kanter was drafted with the third overall pick by Utah during the 2011 NBA Draft.