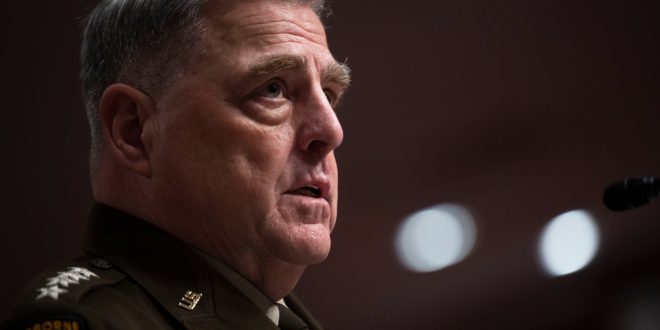 Army Gen. Mark Milley, chairman of the Joint Chiefs of Staff, appear before the Senate Armed Services Committee on the conclusion of military operations in Afghanistan and plans for future counterterrorism operations in Arlington, Va., Sept. 28, 2021. Photo By: Chad McNeeley, DOD

“What we saw was a very significant event of a test of a hypersonic weapon system,” General Mark Milley, chairman of the Joint Chiefs of Staff, told Bloomberg Television.

“I don’t know if it’s quite a Sputnik moment, but I think it’s very close to that,” he added, referring to Russia’s launch of the world’s first artificial satellite in the 1950s, which sparked the space race that dominated the next several decades. “It has all of our attention.”

Army Gen. Mark A. Milley pointed to China’s recent test of a hypersonic weapon system as an example of why the U.S. military is concerned about Chinese intentions.

The chairman of the Joint Chiefs of Staff spoke on Bloomberg News’ David Rubenstein Show and said DOD officials saw the test as “a very significant event.”

Kirby noted the Chinese capabilities “do very little to help decrease tensions in the region and beyond.”

The hypersonic test is just one part of a suite of security issues with respect to China. Kirby said DOD leaders are concerned about the trajectory of where things are going in the Indo-Pacific region. This suite “taken together [is a] reason for concern and [is] being used to inform the operational concepts that we want to be able to employ,” the press secretary said. “They’re informing the budget. They’re informing the programs and the priorities of the department. They’re going to inform … our training and exercise regimen.”

A free and open Indo-Pacific remains a key national security goal for the United States, Kirby said, and DOD has a significant role in that effort. He said China’s actions are factored into deliberations on the global posture review and will be factored into the National Security Strategy and National Defense Strategy next year.

Milley emphasized the same in his talk. He noted the Chinese are expanding rapidly in all domains of warfare — land, sea, air, cyber and space. “They have gone from a peasant army that was very, very large in 1979 to a very capable military that covers all domains, and has global ambitions. China is very significant on our horizon.”