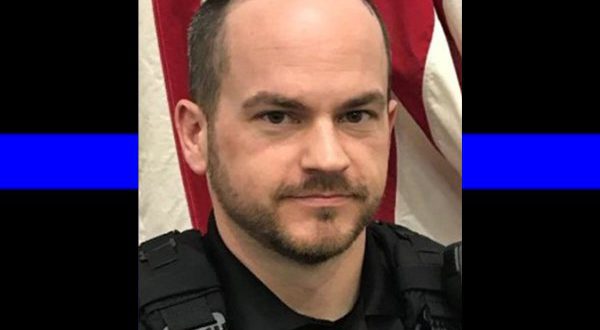 End of Watch: shot and killed while investigating a stolen vehicle.

Officer down: Illinois officer – a young dad – shot to death while investigating report of stolen car

A 14-year law enforcement veteran was shot to death while investigating a possible stolen car at a gas station. The Illinois State Police confirmed the tragic news surrounding Officer Tyler Timmins of the Pontoon Beach Police Department. He had only been with the department for 18 months.

According to reports, Timmins was checking into a car that was potentially stolen around 8 am at a Speedway gas station. A man opened fire on him, striking him at least once and leaving him him with life-threatening injuries.

As reported by KSDK:

The alleged shooter was taken into custody. Details surrounding the suspect have not been disclosed at this time. He was sitting inside the vehicle Timmins was checking when he began shooting. A second person was also taken into custody at the scene.

A witness, who heard the shots but did not see what happened, assisted officers with getting Timmins into a squad car.

I grabbed him by the belt and got in the police car and started pulling him in the back seat so I could help them get him in the car,” Russell Morrow told local reporters.

Timmins was 36-years old and leaves behind a wife and a daughter.

The BackStoppers have stepped in to assist the family.

“Our hearts are heavy today as we are faced with the loss of Officer Tyler Timmins. He was a hero who dedicated his life to serving and protecting our community. Officer Timmins will be honored and remembered and we will be there for his family for the long road ahead,” Chief Ron Battelle, BackStoppers Executive Director, said in a statement on their website.

Earlier this week another Officer, Yandy Chirino was shot and killed.