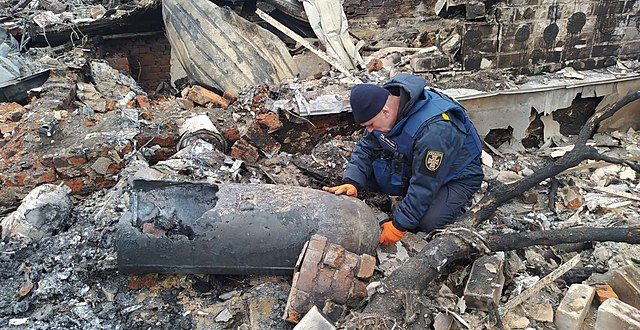 Clearing Battlefields of Ordnance in Ukraine: On the Ground and Embedded in Trees

Former battlefields around Kyiv are littered with unexploded ordnance, and are too unstable to be fully cleared from the ground, according to a British explosives expert who is helping to disarm the bombs.

“It’s too dangerous now to just wander around searching,” said Chris Garrett, a British EOD volunteer who has been working in Ukraine alongside police EOD units.

Much of what Garrett disarms in the forests around Kyiv is the result of secondary explosions, mostly of Russian vehicles carrying ammunition.

“What’s happened is trucks have ended up catching fire or being hit [by Ukrainian artillery] directly,” Garret told RFE/RL. In a process known as sympathetic detonation, the shock wave of one shell exploding from either heat or impact has enough force to “set off the round next to it and so on,” which sends debris flying in all directions.

As well as rockets and artillery shells, Garrett has filmed scores of tiny metal darts called flechettes embedded in trees at one abandoned Russian position. The nail-sized projectiles are used in some tank rounds to kill and maim enemy troops.

After a flechette shell is fired, it pops open to unleash hundreds of darts known for the fearsome buzz they make as they pass, giving the anti-personnel shells the nickname “beehive rounds.”

Earlier this month, Garrett and his team heard “a blast in the woods and a scream.” They tried to investigate the explosion, but could not locate the mystery blast.

Previous Russian Garrisons Near Finnish Border Are Empty; ‘They Don’t Have Anything,’ Intelligence Official Says
Next George Washington Bacon, the CIA’s Man in Laos Before He Became a Merc in Angola