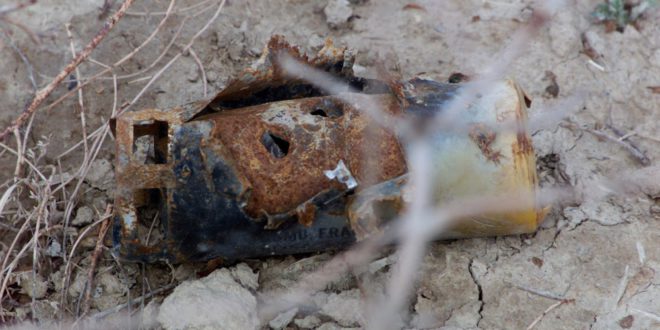 Clearing the Ground in Ukraine, One Bomb at a Time: A Briton at Work in the War Zone

Of all the lethal munitions strewn across towns north of the Ukrainian capital, Chris Garrett says perhaps the nastiest are the Bouncing Betty-type mines designed to spring out of the ground and explode at waist-height.

Speaking by telephone from the north of Kyiv, the British explosives expert describes the leaping Soviet-designed OZM fragmentation mines, which he says are “very, very dangerous” to remove, especially when hooked up to trip wires.

Garrett, a tree surgeon from the Isle of Man, served briefly in the British Army as a teenager, but told RFE/RL that he gained much of his knowledge of explosives after he began clearing landmines in Burma in 2014.

After the war with Russia-backed separatists broke out in the spring of 2014, he arrived in Ukraine and fought with the controversial Azov Battalion, onceshooting a pro-Russian fighter at point-blank range as he fled an armored advance. After that traumatizing escape Garrett switched his focus to explosives ordnance disposal (EOD).

Three days after the full-scale Russian invasion began on February 24, the 37-year-old traveled to Ukraine, and this month he received a personal note of thanks from the National Police of Ukraine for the voluntary EOD work he has been doing in the country.

Garrett is one of at least two Western volunteers in Ukraine now sifting through the wreckage left behind from the Russian invasion to find and destroy unexploded ordnance.

The Briton relies on donations to support the work. He says this is because, by asking for resources and equipment from the Ukrainians, “all I’m doing is taking the equipment out of their hands,” adding that he and his colleagues are “trying to raise money for equipment to help us while we’re here, then once this is all over the plan is to leave it behind for the Ukrainians.”

A shoestring budget is the main reason Garrett is often photographed on his popular Instagram account handling explosives without heavy protection. “For some of the work I would prefer to have protection, but one of those bomb suits costs $45,000,” Garrett says, referring to the astronaut-like protective suits synonymous with bomb scares in the west.

Predicting the time needed to clear the bomb-scattered areas north of Kyiv is difficult, the Briton says, because “we’re still finding [vacated Russian] positions — there’s no map from their side of where the positions were.” Nonetheless, he predicts that within “another month or so we’ll have the bulk of the explosives gone. Then, after that, it will just be a case of, if we get a call saying there’s an item been found, obviously we’ll go out and deal with that.”

Along with the nightmarish leaping landmines, Garrett says unexploded submunitions delivered by rockets, such as those seen above are especially “fragile” and, unlike defused artillery shells, the bomblets can detonate from the slightest touch. “I’m not going to go and pick one up, I’ll destroy it in place where it is,” he says. “The big worry is that someone else around you might knock one they haven’t seen in rubble…. Generally, the one you don’t see is the one that will get you.”

The volunteer chose to reenter Ukraine for the dangerous, profitless work because, he says, “you just know that with every single munition that you’re removing — every bit of unexploded ordinance, you are removing a hazard for someone else. And the bulk of the time it’s civilians that are getting hurt long after the war is finished.”

Garrett says the most treasured memory from his time in Ukraine came while he was running medical donations into the country from Poland soon after the invasion began and he was able to fill the entire van of a Ukrainian aid worker with medical equipment. “It was the first time I’ve seen someone literally jumping for joy,” he recalls. “That’s the nicest thing for me — being able to directly help the people that need it.”