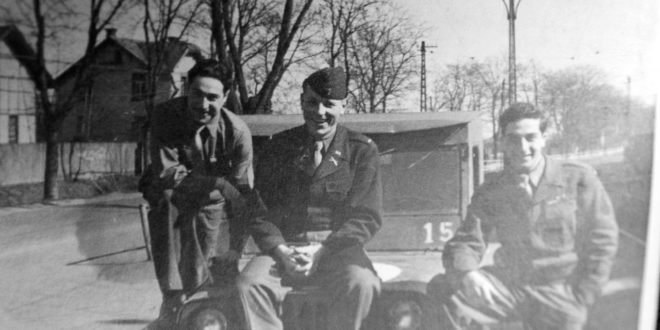 WWII veteran Frank Cohn was born Aug. 2, 1925, in Breslau, Germany, the only child of Martin and Ruth Cohn.

Cohn’s father owned a successful sporting goods store, so, as a youngster, Frank was part of a well-to-do, middle-class family. Then, their good fortune turned.

Uniformed Nazis picketed the store with signs that read: “Don’t buy from Jews.”

“He [my father] saw what was happening and immediately did the best he could in selling the store,” Cohn said in an October 2021 interview during a visit to the Pentagon.

In 1934, Cohn, who was in the second grade, recalled one of his favorite teachers one day showing up to class wearing a Nazi uniform. Also, students began to wear Hitler Youth uniforms and praise the Nazis.

Cohn said that, as a Jew, he was prohibited from taking part in Hitler Youth activities — not that he wanted to — so, he was ostracized by the other students.

His parents took him out of public school and enrolled him in a private, Jewish school.

Cohn’s father had some distant relatives in the United States, so he obtained a visitor’s visa and went to the U.S. He located his relatives, but the country was in the midst of the Great Depression, and they didn’t have enough money to obtain an affidavit of support for him. An affidavit of support is a contract an individual signs agreeing to use their financial resources to support someone who intends to immigrate to the U.S.

Cohn said the aim of the affidavit is to prevent an immigrant from becoming a burden to the state. Otherwise, the immigrants would be deported.

In early 1938, officers from the Gestapo, the secret police force of Germany’s Nazi state, went to the Cohn family’s home looking for Cohn’s father. Ruth Cohn wrote to her husband in the U.S. to warn him not to return to Germany because his life would be in danger.

At that time, Ruth Cohn managed to obtain visitor visas from the U.S. Embassy for herself and her son for travel to the U.S.

“It was lucky that there were no computers because had they known that my father was already in the United States, she wouldn’t have gotten visitor visas because that would indicate we were refugees,” Cohn said.

Soon, Ruth packed their belongings into two suitcases and got first-class tickets on Holland America’s Staatendam steamer, which left from Amsterdam for New York City.

Cohn said his mother feared that if U.S. immigration authorities knew that her husband was already in the U.S., they would order mother and son to immediately return to Germany. However, first-class passengers disembarked directly onto the pier, avoiding the authorities on Ellis Island where processing took place.

On Nov. 9, 1938, a wave of violent anti-Jewish demonstrators bent on killing or expelling Jews took place throughout Germany and Austria; it was referred to as Kristallnacht. In response, President Franklin D. Roosevelt issued an executive order permitting German immigrants already in the country to stay, and the Cohns’ visitor visas were extended indefinitely.

A Jewish relief organization provided basic needs for the Cohn family, and Cohn continued his education in the New York City public school system. A tutor helped him learn to speak English.

“Technically, I was an enemy alien, so I was not allowed to enlist,” he said, adding that just a month later, he was drafted into the Army.

During basic training at Fort Benning, Georgia, Cohn was sworn in as a U.S. citizen and assigned to the 87th Infantry Division. He said becoming an American citizen was one of the greatest highlights of his life.

Cohn was soon on a ship bound for England. A few months later, he boarded a tank landing ship known as an LST, headed for Normandy, France.

The D-Day landings had taken place a few months earlier on June 6, 1944, so his LST landed on Omaha Beach unopposed by enemy forces. From there, he and others made their way to Belgium by train.

While in Belgium, the Army discovered that Cohn spoke German, so he was sent to Le Vesinet, France, for an intelligence course.

He subsequently became a member of a Twelfth U.S. Army Group intelligence unit.

“Our mission was to go into the big cities in Germany as they were captured, and we would have intel dossiers on ‘building’ targets and ‘personality’ targets,” he said. Building targets, including Nazi headquarters, were sites that could be used by the occupying force and could contain records that might be used in the prosecution of war crimes; personality targets were people on the list for automatic arrest, who were to be tried for war crimes.

Cohn’s team of six soldiers first traveled to Luxembourg, then Belgium. On Dec. 16, 1944, while they were in Belgium, the Battle of the Bulge started — a major German offensive on the Western Front with the aim of pushing Allied Forces back to the sea.

The intel team’s mission then became locating German infiltrators wearing U.S. uniforms. An infantry unit they visited had spotted and killed four of these infiltrators.

At one point, the intel team itself was interrogated by U.S. forces because a couple of team members had German accents, but they were cleared by headquarters.

By early 1945, the intel team had arrived in Cologne, Germany. Cohn recalls the Germans training artillery fire on his team from across the Rhine River, and barely escaping in their jeep.

By April of that year, the team was in Magdeburg, Germany, on the Elbe River. The Soviets had arrived on the east side of the river, and U.S. troops were on the west side.

Cohn and part of his team crossed the Elbe and met the Soviet soldiers for a joyous occasion. He recalls handing out American cigarettes and getting vodka in return.

During the subsequent occupation by Allied forces, Cohn was tasked with guarding war criminals, overseeing German prisoners of war, and shipping Nazi documents back to the U.S. to support future war crime prosecutions.

After the war, Cohn decided to make the Army a career. He married Pauline Brimberg in 1948. They had one daughter, Laura Cohn, who’s now a volunteer at the United States Holocaust Memorial Museum in Washington, D.C.

Cohn served in two more wars — Korea and Vietnam — and even had two tours of duty in West Germany. In 1978, he retired as a colonel after completing his last assignment as chief of staff for the Military District of Washington.

The Russians later honored Cohn’s service and invited him to Moscow, all expenses paid, for the 60th, 65th and 70th anniversaries marking the end of World War II. Cohn said he would have traveled there for the 75th anniversary, as well, had it not been for the COVID-19 pandemic.

To this day, Cohn said he’s grateful for Roosevelt’s executive order, which saved his life and the lives of others.

The World War II veteran is 96, and he said he’s still grateful for what the United States has done for him and for living in freedom.

Cohn said he tells young people to never take freedom for granted and to be willing to fight for it, if necessary.