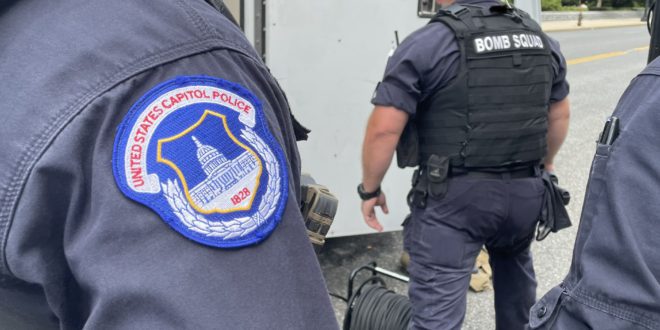 (Washington, DC) Judicial Watch announced today that it received 329 pages of records from United States Park Police related to the January 6, 2021, demonstrations and disturbance at the U.S. Capitol. The records show that on the day before the January 6 rally featuring President Trump, US Park Police expected a “large portion” of the attendees to march to the US Capitol and that the FBI was monitoring the January 6 demonstrations, including travel to the events by “subjects of interest.”

These documents were received in response to a May 2021 Freedom of Information Act (FOIA) lawsuit that was filed after the U.S. Park Police failed to comply with a March 2021 FOIA request for records regarding the January 6 rally (Judicial Watch v. U.S. Department of Department of the Interior (No. 1:21-cv-01392)).

POTUS event concluded.
Crowds are marching towards Capitol.
Capitol PD working three very suspicious packages around Capitol proper.
We are checking our NPS areas for suspicious packages out out [sic] an abundance of caution.
NPS areas are clearing out. Still heavy visitation throughout Mall Core.
Capitol PD and MPD are engaged with crowd and munitions being deployed. Crowd has breached the fence lines.
Large crowds at BLM Plaza as well.

Large group (200+) of Proud Boys are on the US Capitol grounds. We are monitoring the groups’ [sic] movements through the city. There are no large groups of counter protesters currently being tracked.”

Large group has breached the fence line at the west front of the US Capitol. USCP are handling and not requesting assistance from USPP at this time.

USCP heavily engaged w/ protestors at the west front of the Capitol. Chemical munitions and physical altercations on going.

Libby then asks officer Tim Wallace, “Are you in the JOC [Joint Operations Center]? Are they tracking any large groups other than the Proud Boys at the capitol?”

Wallace responds, “Not tracking any other splinter groups other than that one towards the Cap. Right now all focus on these weapons reports.”

Wallace then informs Libby of an “IED” [Improvised Explosive Device] located at 300 1st Street, SE. And then of a “Second device” found at 430 South Capitol Street and asks Libby, “Are you hearing anything about 2 more devices? Unconfirmed here.”

Libby replies, “No – nothing.”

Finally, at 2:14 p.m., Libby texts a Coast Guard official: “Capitol fence has been breached on both sides, east and west. USCP, MPD, and USPP have our backs to the Capitol wall … Mutual Aid assistance has been requested to all metro LE agencies.”

Pages 41-45. On January 6, 2021, a situation report submitted by Adamchik details the following:

No civil disobedience reported at this time” in the “Active Crowds,” which included “10,000 plus waiting in line” to go through magnetometers to be on the Ellipse during Trump’s speech.

Currently, the IOC [Information Operations Center] is monitoring the suspected or reported travel of [redacted] subjects of interest from various field offices [redacted]. [Redacted] of the subjects were reported as not traveling to the NCR [National Capital Region]. As of 1000, the IOC had not confirmed the arrival for the rest of these subjects of interest in Washington, DC.

The FBI’s IOC was “tracking” the following events: Freedom Rally, Wild Protest, Jericho March and Save America Rally. The report was forwarded to Park Police Capt. Michael Libby, who told colleagues a, “Large group (200+) of Proud Boys are on the US Capitol grounds. We are monitoring the groups’ [sic] movements through the city. There are no large groups of counter protesters currently being tracked.”

Page 15. In a January 6, 2021, situation report Park Police Major Mark Adamchik, advises colleagues “in addition to the pepper ball team, USPP has offered portions of the Motorcycle Unit for dignitary escorts as well as a cadre of [redacted].” Adamchik also notes that, “No injuries to USPP personnel.”

Page 269-275. In a January 5, 2021, Park Police “Incident Briefing” report, the purpose of the January 6 rally was described in part as being “to protest election integrity.” The report notes:

This group has significant potential to attract counter-protesters, similar to events in November and December 2020. Multiple acts of violence have occurred in the downtown Washington, DC area during and after similar events hosted by the same organizer.

As long as POTUS has finished speaking, we still expect a large portion of this group to depart the Ellipse at some point and march to the U.S. Capitol prior to 1300 hours.

Page 83-84. On January 5, 2021, in an mail with the subject line “BLM from Baltimore,” a Capitol Police official in the Intelligence and Interagence Coordination Division forwarded a tweet to colleagues that warned of “Pantifa/bLM Balt/DC branches are already bussing in people to disturb January 6th. Orders given to dress like ‘MAGA’ blend in cause trouble especially around cameras. At night arson has been ordered. All to be blamed on Trump supporters attending.” The police official notes “There are multiple replies to this comment that says BLM/Antif will wear MAGA hats backwards, wear camo, and attempt to blend in with MAGA crowd.”

Pages 25-26. On January 5, 2021, the Park Police forwarded a “Women for America First” rally incident brief and permit to their staff.

Page 66. The January 5, 2021 “Daily Operational Snapshot” notes: “Reported Proud Boys leader, Enrique TARRIO was arrested on 4 January by the Metropolitan Police Department on an outstanding DC Superior Court arrest warrant. It is unknown what effect this will have on the actions of the Proud Boys over the next 48 hours. TARRIO was viewed by some as keeping the more violent factions of the Proud Boys ‘under control’ during recent demonstrations in the District.”

Also included in this report: “Women for America First will hold a rally on the Ellipse. President Trump is scheduled to speak at this event around 1100 hours. The permit application states that 20,000 people will attend this event. It is expected that a portion of this group will march to the US Capitol prior to 1300 hours.”

Page 315-316. In a text exchange on January 4-5, 2021, Park Police officials discuss the arrest of Proud Boys leader Enrique Tarrio and state that the January 6 rally is being manipulated by a “grand puppeteer:”

Official One: “No arrest warrant for [redacted]. Tarrio arrested at 1630.”
Official Two: “Copy”
Official Two: “I’m assuming he will get kicked tomorrow and still be around for the Wednesday.”

Official Two: “Dude this is insane. I’m more confused now than before 9am.”
Official One: “These ‘organizers’ are being played by the grand puppeteer and seems like the goal is to confuse, confuse, confuse so they can get what they want when they want it, on their terms. Very annoying.

Page 65. A January 4, 2021, Park Police “Daily Operational Snapshot” notes: “While the probability of sporadic violent actions is likely if opposing groups are allowed to come into physical contact with each

other, at this time we have no indication of any acts of violence being pre-planned by an specific individual(s) or groups.”

Page 29. On January 4, 2021, Adamchik accepted an invitation to a “First Amendment Coordination Call for First Amendment Preparations for January 6, 2021”

Official One: “President Donald Trump Calls for Protest in DC on Jan. 6, Says ‘Be The…” [a link to a Gateway Pundit article is apparently included]
Official One: “Like Degeneration X would ask… Are you ready?”
Official Two: “I’m at the beach.”

A colleague replies, “Agreed. This is all over the place.” Another police official responds, “POTUS?”

David Lamond, Commander of the Park Police Special Events Unit, replies, “I’m more confused than I was before. If am tracking correctly, no one knows what is going on anymore.”

An MPD official then mockingly compares that planning to a chaotic football play, “Ok – you go long – [redacted] will fall out to the weak side – [redacted] will go strong side – and [redacted] up the middle – then I’ll pass it off to [redacted] and she will end around on the strong, weak, and middle???”

There is some concern that individuals may display aggressive and desperate behavior as they interpret 6 January as their final opportunity to act on their grievances. A recent event on Christmas morning may directly reference this desperation leading to violent action by a motivated and determined individual.

The report references the December 25, 2020, bombing in Nashville, TN:

While the exact motive behind the bombing remains unknown, there have been some social media postings concerning conspiracy theories stating that election data stored at the AT&T building was targeted by the bomber…. [T]he 25 December bombing should act as a vivid reminder as to the despair and the dedication to act that exists from a small minority of individuals concerning social and political events.

We are aware that many members of the far-right group ‘Proud Boys’ plan on being in Washington on this date.

We also expect far-left groups to continue to engage law enforcement and their opposition with weapons such as bottles, bricks, commercial grade fireworks, and laser pointers.

Page 86-88. On December 22, 2020, a Lieutenant of the MPD Special Operations Branch messaged colleagues, “Well, here we go again. I am sure you are aware of the First Amendment demonstrations to occur again on Wednesday, January 6, 2021; hopefully it will not be as big as the November 14th or December 12, 2020, weekend.”

Page 68-69. In a December 19, 2020, email to Capitol Police and US Park Police colleagues, an MPD Homeland Security Bureau official told them he was “hoping” that an announcement about an upcoming pro-Trump rally in January “is a hoax.”

Page 22. In a situation report sent on December 12, 2020, about “First Amendment Demonstrations” notes, “Currently there are 2000 people (Proud Boys group) on the Washington Monument grounds, within the flagpole circle. At 1303 hours, there was a fight involving this group, which broke up without incident.”

“These previously hidden documents show that federal law enforcement was both closely monitoring the First Amendment-protected activities of Americans and had plenty of warning there would be a huge crowd at the US Capitol on January 6,” stated Judicial Watch President Tom Fitton.

The lawsuit is part of Judicial Watch’s ongoing investigation into the January 6 disturbance.

Earlier this month, Judicial Watch received records from the DC Metropolitan Police about the shooting death of Ashli Babbitt on January 6, 2021, in the U.S. Capitol Building.

Also in August, Judicial Watch uncovered records related to the death of U.S. Capitol Police Officer Brian Sicknick which show major media representatives pressuring the Office of the Chief Medical Examiner (OCME) of the District of Columbia over its conclusion that Officer Sicknick had died of natural causes.

In July, Judicial Watch announced a lawsuit against the FBI for records of communication between the Federal Bureau of Investigation (FBI) and several financial institutions about the reported transfer of financial transactions made by people in DC, Maryland and Virginia on January 5 and January 6, 2021. The FBI has refused to confirm or deny the existence of any such records.

In May, Judicial Watch sued both the Department of the Interior and the Department of Defense for records regarding the deployment of armed forces around the Capitol complex in Washington, D.C., in January and February of 2021.

Judicial Watch also filed a lawsuit for Speaker Nancy Pelosi’s communications with the Pentagon in the days after the January 6 incident.