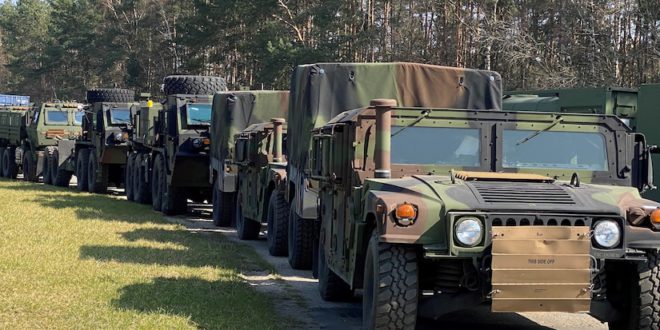 The forthcoming action in the Donbas region of Ukraine will be a “knife fight,” according to a senior U.S. defense official.

After the failure of the Kyiv campaign, the Russians are moving units to the east and beginning to feed them into the fight for the Donbas. “This will be a knife fight,” the official said. “This could be very bloody and very ugly.”

Russia invaded the area in 2014, and Ukrainian and Russian forces have been confronting each other there ever since.

It is becoming the main scene of battle in the country after Russian President Vladimir Putin’s failed attempt to take the Ukrainian capital of Kyiv. “The Russians and the Ukrainians have been focused on the Donbas for eight years, and [it’s been] for eight years that the Ukrainians have been able to stymie Russia’s larger objectives in the Donbas,” the official said. “But the fighting has been bloody, it’s been stiff. And it’s been pretty consistent for years.”

After the failure of the Kyiv campaign, the Russians are moving units to the east and beginning to feed them into the fight for the Donbas. “This will be a knife fight,” the official said. “This could be very bloody and very ugly.”

The Russians are limiting their geographic aims, but they still have a lot of combat power available. This could go on for a long time,” the official said.

The Russian units that were attacking Kyiv have withdrawn and are refitting in Belarus and western Russia. The units are making their way to Russian towns of Belgorod and Valuyki, which are near the border with Ukraine and the northern part of the Donbas region.

Airstrikes follow this new situation, with Russia launching between 240 and 250 sorties over the past day with the overwhelming weight and focus of their strikes aimed at Mariupol and the Joint Force Operations area. Refitting the Russian units is going to take some time, the official said.

Some of the units that attacked Kyiv were severely mauled, with many battalion tactical groups experiencing a combined personnel and equipment reduction of 30% and others hurt even more. “We’ve seen indications of some units that are literally … eradicated — there’s just nothing left at the BTG except a handful of troops and maybe a small number of vehicles,” the official said.

It may take some time for these units to be reconstituted, and this could be further complicated by continuing failures in logistics. “We believe that they have not solved all of their logistics and sustainment problems and that those problems did not just exist inside Ukraine,” he said. “They existed outside Ukraine and still do exist. And so, our sense is that they will likely not be able to reinforce the eastern part of the country with any great speed.”

This is a report from Jim Garamone / DoD News