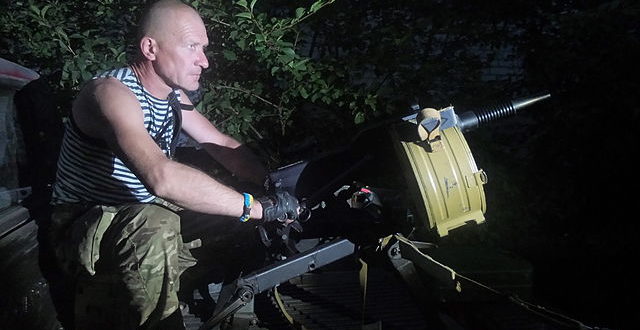 A Russian fighter in Donbas

The battlefield situation in the eastern Donbas region is “just hell,” Ukrainian President Volodymyr Zelenskiy said, noting that despite U.S. supplies of rocket artillery, Kyiv’s forces have not been able to overcome Russian advantages in heavy guns and manpower.

The imbalance is “very much felt in combat, especially in the Donbas,” he said on August 2 in his nightly address. “It is just hell there. It can’t even be described in words.”

He said that the word HIMARS — short for high mobility advanced rocket systems — has become “almost synonymous” with the word justice for Ukraine, “and the Ukrainian defense forces will do everything to ensure that the occupiers experience more and more painful losses every week thanks to these very effective systems.”

The advanced and more precise HIMARS have been supplied by the United States, and on August 1 the White House said a new package of military aid would include additional ammunition for the systems, which it said “are making a difference on the battlefield.”

There were reports earlier on August 2 of air strikes in southern Ukraine, where tens of thousands of Russian troops reportedly were preparing to advance on the cities of Kriviy Rih and Mykolayiv.

Mykolayiv Mayor Oleksandr Sienkovych said that a fire started in one of the districts of the city due to explosions late on August 2.

“After powerful explosions around 9 in the evening, a fire started in one of the districts of the city. There are also power outages,” he said on Telegram.

Some missiles fired later in the day were thwarted by Ukrainian defenses. The press service of the Southern Air Command said that at around 5:30 p.m. local time, four Russian X-type cruise missiles were detected and destroyed in the sky over the Mykolayiv region.

“Cruise missile launches were carried out from Russian Tu-95MS and Tu-160 strategic bomber missile carriers from the northern part of the Caspian Sea,” the press service said.

In east central Ukraine, the head of the Dnipropetrovsk region’s military administration, Valentyn Reznichenko, reported that Russian troops fired rocket launchers and artillery at districts in the region.

In western Ukraine, Maksym Kozytskiy, head of the Lviv regional military administration, reported that there were no victims in missile strike by the Russian military in the region on August 2.

The strike involved eight cruise missiles fired from the east, he said. Some of them were shot down by air defense forces in other regions, and Kozytskiy thanked for their work.

In total, the Ukrainian military shot down seven out of eight Russian cruise missiles fired in the direction of the central, southern, and western regions of Ukraine on the evening of August 2.

The air command previously said that a Russian rocket hit an anti-aircraft missile system in the Lviv region near the border with Poland. There was no immediate word on damage or casualties.

In the southern Kherson region, Ukraine has recaptured 53 settlements in the mostly Russian-occupied since the start of Moscow’s invasion, regional Governor Dmytro Butriy said on August 2.

The claims could not be independently verified.