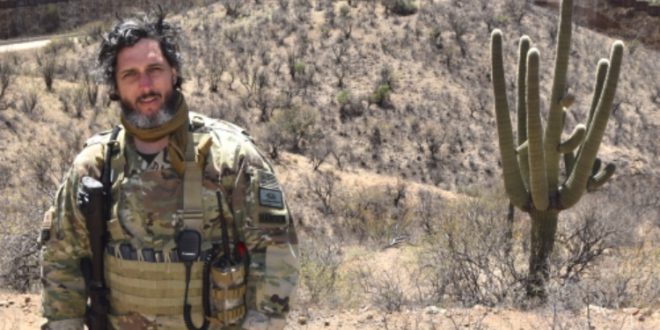 I loaded my pistol, ammunition, and gun belt into the trunk of my car and headed out. I was on my way to a gun club in San Diego County, to put a few rounds down range.

As I headed East, I looked out across Lower Otay Lake; the sun had already risen above the mountaintops and created a beautiful backdrop for my drive into the mountains.

Suddenly, two Border Patrol vehicles drove past me, at a high rate of speed, and vanished around the corner in the road ahead of me. This is South San Diego, “Typical,” I reflected.

As I turned the corner, I saw the Border Patrol vehicles pulled over on the North side of the road, with their code-3 lights engaged. I could tell there was a group of detainees sitting next to their vehicles. I pulled out my phone and started recording.

As I drove by, I observed eight military-age males, wearing camouflage, sitting on the side of the road. The eighth man noticed I was recording, and grinned at me as I drove past the group. “Asshole,” I thought.

I have many friends in the Border Patrol who have told me the turn around time is very quick with some of these guys. They’ll be deported to Mexico and end up illegally crossing back into the US within a week. Unfortunately, not all of these guys are just “immigrants looking for a better life.”

The guy flashing me a grin knew the border policy of the U.S. is a joke; he wouldn’t even receive a slap on the wrist, and be back here in a few days. Later on, I called the public relations office for the local Border Patrol station to ask about what I had seen, but received no response.

I continued my journey. As a private citizen there isn’t much I can do to prevent illegal immigration, but there is plenty I can do to be prepared to defend myself whenever necessary. “He will win who knows when to fight and when not to fight.” – Sun Tzu