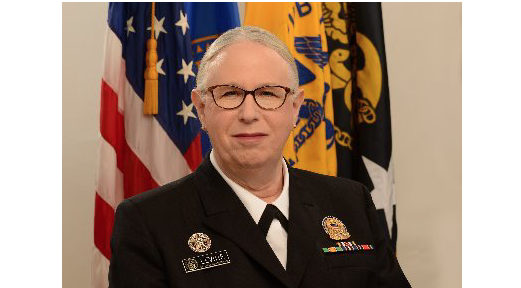 “I am deeply honored & grateful to join the ranks of men & women across this great nation who have committed to defend the United States against small & large threats, known and unknown. I promise to uphold that trust to the fullest extent of my abilities,” Dr Rachel Levine

Dr. speech stressed Diversity and said she will follow the science.

The USPHS Commissioned Corps with 6000 members, is one of the nation’s uniformed services — a branch committed to the service of health. Officers advance our nation’s public health, serving in agencies across the government, as physicians, nurses, dentists, veterinarians, scientists, engineers and other professionals.

Admiral Rachel L. Levine serves as the 17th Assistant Secretary for Health for the U.S. Department of Health and Human Services (HHS), after being nominated by President Joe Biden and confirmed by the U.S. Senate in 2021. As Assistant Secretary for Health, ADM Rachel Levine fights every day to improve the health and well-being of all Americans. She’s working to help our nation overcome the COVID-19 pandemic and build a stronger foundation for a healthier future – one in which every American can attain their full health potential. ADM Levine also is the head of the U.S. Public Health Service Commissioned one of the eight uniformed services.

After graduating from Harvard College and Tulane University School of Medicine, ADM Levine completed her training in Pediatrics and Adolescent Medicine at the Mt. Sinai Medical Center in New York City. As a physician, she focused on the intersection between mental and physical health, treating children, adolescents, and young adults. ADM Levine was a Professor of Pediatrics and Psychiatry at the Penn State College of Medicine. Her previous posts included: Vice-Chair for Clinical Affairs for the Department of Pediatrics, and Chief of the Division of Adolescent Medicine and Eating Disorders at the Penn State Hershey Medical Center.

In 2015, Pennsylvania Governor Tom Wolf nominated ADM Levine to be Pennsylvania’s Physician General and she was subsequently unanimously confirmed by Pennsylvania’s state Senate. In March of 2018, ADM Levine was named Pennsylvania’s Secretary of Health. During her time in state government, ADM Levine worked to address Pennsylvania’s opioid crisis, focus attention on maternal health and improve immunization rates among children. Her decision to issue a standing order for the anti-overdose drug, Naloxone, saved thousands of lives by allowing law enforcement to carry the drug and Pennsylvanians to purchase it without a prescription from their doctor.

ADM Levine is a Fellow of the American Academy of Pediatrics, the Society for Adolescent Health and Medicine, and the Academy for Eating Disorders. She was also the President of the Association of State and Territorial Health Officials. In addition to her recent posts in medicine and government, ADM Levine is an accomplished speaker and author of numerous publications on the opioid crisis, adolescent medicine, eating disorders, and LGBT medicine. Official Website Bio