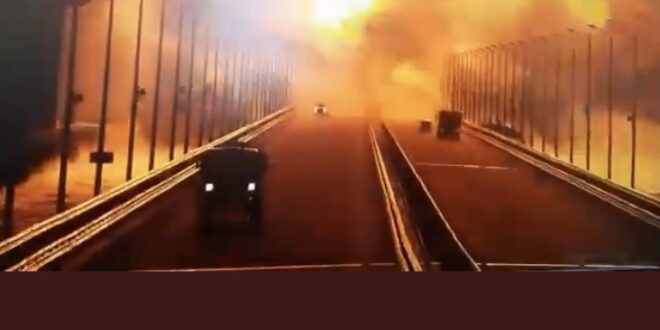 Strikes on Kyiv Are Retaliation for Bridge Explosion, Putin Says

In Moscow, Russian President Vladimir Putin said the strikes were retaliation for what he called Kyiv’s “terrorist” actions, including an attack last weekend on a key bridge between Russia and the annexed Crimean Peninsula.

Zelenskiy said there were dead and wounded in the series of blasts that rocked cities across Ukraine in what appeared to be revenge strikes after Moscow blamed an explosion on the bridge linking Russia with illegally annexed Crimea on Ukrainian “terrorists.”

“This morning is difficult. We are dealing with terrorists,” Zelenskiy said in a video posted on social media that showed him outside his presidential office.

“Dozens of missiles and Iranian Shaheds (drones). They have two targets. Energy facilities throughout the country… They want panic and chaos, they want to destroy our energy system,” Zelenskiy said. “The second target is people. Such a time and such targets were specially chosen to cause as much damage as possible.”

In a video call with members of Russia’s Security Council on October 10, Putin said that the Russian military launched “precision weapons” from the air, sea, and ground to target key energy and military command facilities.

But the wave of strikes on major cities hit residential areas and critical infrastructure facilities alike.

Rostyslav Smirnov, an adviser to the Ukrainian Ministry of Internal Affairs, said at least eight people were killed and 24 were wounded in just one of the strikes on Kyiv, which was shaken by a wave of explosions.

An Oct. 8 explosion that damaged a key bridge linking Russia to the occupied Crimea is a first salvo in a campaign to recoup “everything stolen” from Ukraine, a Kyiv official said.

“Crimea, the bridge, the beginning,” wrote Mykhaylo Podolyak on Twitter following the Saturday morning blast. “Everything illegal must be destroyed, everything stolen must be returned to Ukraine, everything occupied by Russia must be expelled.”

Podolyak, an adviser to Ukrainian President Volodymyr Zelenskiy, stopped short of claiming that Kyiv is responsible for the incident.

A blast and fire suspended traffic and damaged the bridge on Oct. 8 in what Moscow said was a car bombing.

“A truck exploded on the Crimean Bridge on Saturday morning, causing several fuel tanks of a railway train to catch fire,” wrote TASS, the Russian government news agency. “Two spans of the road bridge collapsed but a lane leading from Crimea to the Krasnodar Region reportedly remained intact. Traffic on the road and railway parts of the bridge was suspended.”

The Russian government formed a commission to investigate what happened, and says that it knows who owns the truck that triggered the blast.

A video shared on pro-Ukrainian social media showed a raging fire on the rail section of the dual road-and-rail Crimea Bridge over the Kerch Strait and a collapsed span on the nearby road segment.

The three-year-old bridge became a symbol of Russian revanchism and has been used to transfer troops, weapons, equipment, and fuel from Russia to Ukraine during the current invasion.

The Crimea Bridge is Europe’s longest and was intended to consolidate Russia’s control over Crimea, which it invaded and annexed in 2014.

Previous Russian Soldiers Told to Use Menstrual Products On War Wounds
Next A Swedish Mercenary in Iraq: A Ghostwriter’s Ode to Axel Stal