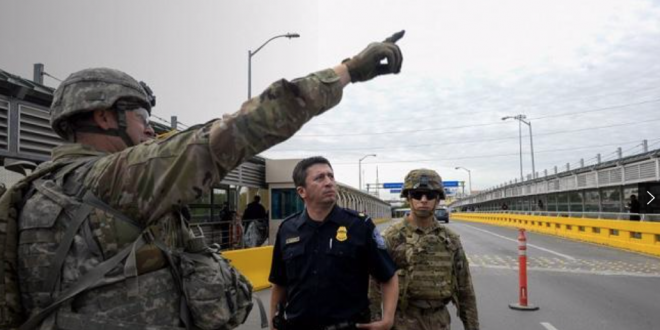 “i have authorized the Texas National Guard and the Texas Dept. of Public Safety to fire back if fired upon. The soldiers and officers guarding our border will defend themselves against the smugglers & cartels.” Gov Abbott I said after reports of yet another shooting From across the Mexico border targeting Customs Border Patrol agents.

Approximately 20 rounds were fired towards the agent from approximately 150 yards away. Fortunately, none of the rounds struck the agent,” CBP stated.

“The operational statistics for Fiscal Year 2021 show the breadth and scope of CBP’s mission, which encompasses travel and trade, drug interdiction, and border security,” said CBP Commissioner Chris Magnus.  “CBP’s mission is vital to making our country safer and more secure, and important to our economic recovery.

CBP officers, Border Patrol agents, and Air and Marine Operations agents continue to interdict the flow of illicit narcotics across the border. In FY2021, CBP seized 624,500 pounds of drugs.

Fetanyl fatalities increased by 49.4% in the last 12 months With drug overdoses reaching over 100,000.

CBP Efforts at and Between Ports of Entry

In FY 2021, CBP recorded a total of 1.72 million enforcement encounters, including 146,054 encounters of unaccompanied children, 478,492 encounters of individuals in family units, and 1,098,500 encounters of single adults.  The majority of all encounters were processed in accordance with orders from the CDC under its Title 42 public health authority to limit the spread of COVID-19.

The number of total encounters overstates the number of unique people attempting to cross the border.  Prior to the pandemic, about one in eight border encounters involved a person previously encountered during the prior year.  However, since CBP began expelling noncitizens under the CDC’s Title 42 public health order to limit the spread of COVID-19, the repeat encounter rate jumped to more than one in three encounters, including almost half of single adult encounters.  Thus, while total enforcement encounters increased 82 percent between 2019 (the last pre-pandemic year) and 2021, the number of unique individuals encountered at the border increased 30 percent.

Unique encounters of unaccompanied children (UC) along the Southwest Border increased 73 percent compared to 2019, the last pre-pandemic year.  The increase in encounters, coupled with the prior administration’s failure to expand the Department of Health and Human Services’ (HHS) capacity to receive unaccompanied children from Border Patrol stations within the required timeframe, meant that, early in 2021, children were staying in Border Patrol stations for too long.

The customs and border patrol is regularly arresting child sex offenders although many may not be spotted or apprehended.