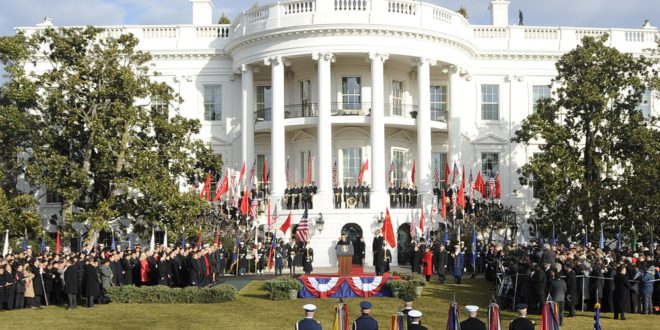 President Joe Biden has awarded the Medal of Honor, the nation’s highest award for valor, to four U.S. Army soldiers for their actions during the Vietnam War.

During a ceremony at the White House on Tuesday, President Joe Biden presented the award to Specialist 5 Dwight Birdwell, Major John Duffy, and Specialist 5 Dennis Fujii.

“It’s just astounding when you hear what each of them have done,” Biden said Tuesday. “They went far above and beyond their duty.”

Kaneshiro was leading an infantry squad in 1966 when North Vietnamese fighters attacked his unit. He repelled three enemy groups with gunfire and grenades, allowing the rest of his unit to safely withdraw. He was shot and killed during fighting on March 6, 1967.

Birdwell, the first Native American honored for action in Vietnam, was serving near Saigon in 1968 when his airbase came under attack. He managed to rescue his wounded tank commander, and according to the White House, he continued fighting until he was wounded in the face and torso. Birdwell then remained to evacuate other wounded soldiers.

“When he was ordered to load onto the medevac [medical evacuation] helicopter, he complied — this I find amazing — only to crawl right back off the other side to keep on fighting,” Biden said.

Duffy also refused to be evacuated after being wounded twice in battle in 1972, instead moving closer to enemy positions to call in airstrikes. According to the White House, he was the lone American on his base while serving as a senior American adviser to the Army of the Republic of Vietnam. As the base was surrounded, Duffy guided U.S. gunships to counterattack and helped allies at the base evacuate.

“Major Duffy repeatedly exposed himself to danger in order to direct the gunships’ fire and keep the battalion from being overrun,” said Biden, explaining that the soldier called in one strike that was dangerously close to his own position in order to drive the attackers back.

Fujii was in a medevac helicopter that crashed during a rescue operation in 1971. Rather than place his fellow troops in danger, he waved off evacuation attempts, instead placing himself in danger to treat the wounded and call in American helicopter gunships to repel attacks over the following 17 hours until he could be safely airlifted.

“We will forever honor your commitment to your crew, your allies and to your country,” Biden told Fujii Tuesday.