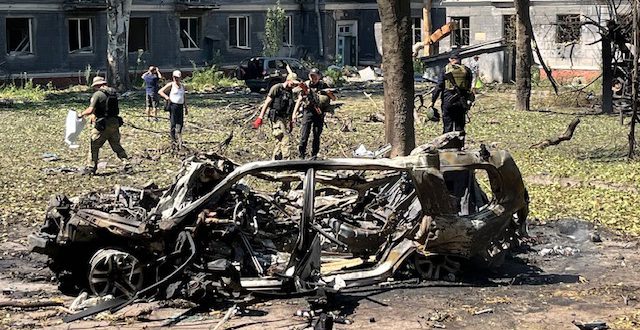 KRAMATORSK, UKRAINE – In the North side of Donbas salient, as the Russians regroup for the next push against Slovyansk, Kramatorsk comes under air and long range rocket fire.

Today, a precision guided aerial munition struck this Ukrainian position in the center of the small city, killing at least two soldiers, destroying vehicles and damaging the surrounding buildings.

It is believed this is part of pre planned preparatory fires to soften up the area before the Russians begin their next push.

About 23,000 people remain in Sloviansk, down from a prewar population of 107,000, according to Mayor Vadim Lyakh. The pace of evacuations has increased, officials said.

Additional trains will be added to the rail transportation schedule, in order to accommodate evacuations, according to Ukrainian Railways.

Owen Thorne is Chief Correspondent for Soldier of Fortune.