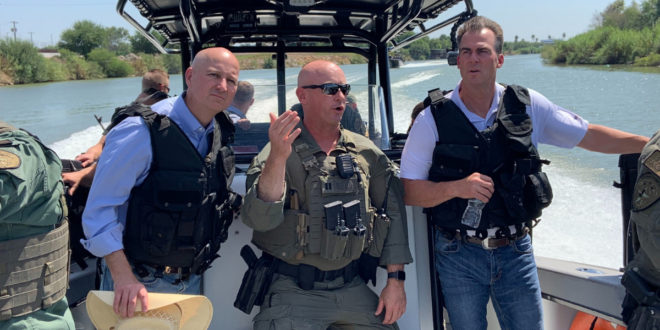 Governor Kevin Stitt and eight other governors received a law enforcement briefing from Texas Governor Greg Abbott, Texas Department of Public Safety Director Steve McCraw and National Border Patrol Council President Brandon Judd regarding the southern border crisis which has impacted the use, trafficking, and distribution of illicit drugs in Oklahoma. Following the briefing Governor Stitt toured the US-Mexico border by boat on the Rio Grande.

“The crisis that President Biden created at our southern border is unbelievable. In the last year alone, a record of over one million individuals have been arrested or apprehended attempting to cross into the United States illegally,” said Governor Stitt.

“This border crisis affects our entire nation. In Oklahoma, we have seen an increase in the trafficking of illicit drugs, namely methamphetamine and fentanyl, which are being smuggled across our southern border from Mexico. Most methamphetamine available in our state is produced in Mexico and fentanyl-related deaths are up over 150% over the last year. This is a serious security issue directly impacting Oklahomans.”

Oklahoma law enforcement continue to seize record amounts of illicit drugs that are tied to Mexico drug trafficking organizations (DTO). Due to Oklahoma’s strategic centric location, since the 1990s, some of the most powerful DTOs operating in Mexico have established distribution channels in the state. There are 935 miles of interstate highways in Oklahoma, including Interstate 40 which extends across the country from Barstow, California to Wilmington, North Carolina. This extensive interstate highway system is attractive to drug traffickers and creates a unique challenge to law enforcement in Oklahoma.

Governor Kevin Stitt issued the following statement after Attorney General John O’Connor filed lawsuits on behalf of the State of Oklahoma to fight back against the Biden administration unilaterally imposing unlawful vaccine mandates on federal contractors and federally contracted employees as well as private sector employees:

“I promised Oklahomans that we would sue the Biden administration for its unlawful vaccine mandates as soon as the rules were made public and that is exactly what we’ve done.

“I am proud to have Attorney General John O’Connor and the Legislature on our side fighting back against the constant federal overreach coming from the Biden White House.

“We’ve asked the courts to immediately intervene and stop President Biden from demanding that American citizens comply with the federal government’s order to get a vaccine to keep their jobs.

“Forcing people out of work while businesses across the country are already struggling to find enough employees and our supply chain is experiencing historic disruptions proves that President Biden is totally out of touch with reality.

“I will keep fighting to protect Oklahomans’ individual freedoms, and this mandate will not stand.”

Governor Kevin Stitt sent a letter to U.S. Secretary of Defense Lloyd Austin requesting COVID-19 vaccine mandates be suspended for members of the Oklahoma National Guard. An estimated 800 Oklahoma guardsmen have not received or are not planning to receive the COVID-19 vaccine, which is about 10% of Oklahoma’s overall force.

“It is irresponsible for the federal government to place mandatory vaccine obligations on Oklahoma national guardsmen which could potentially limit the number of individuals that I can call upon to assist the state during an emergency,” wrote Governor Stitt.

The Honorable Lloyd J. Austin III Secretary of Defense
U.S. Department of Defense Washington, DC 20318-9999
Dear Secretary Austin,
J. Kevin Stitt Office of the Governor
State of Oklahoma
November 2, 2021
I am writing to request that the Department of Defense immediately consider suspending the COVID-19 vaccine requirement for national guardsmen in Oklahoma. This mandate violates the personal freedoms of many Oklahomans, as it asks them to potentially sacrifice their personal beliefs in order to not lose their jobs. All of our national guardsmen take this calling very seriously. These are patriotic citizens who are willing to put their lives on the line to protect others in our communities during times of greatest need.

There are also practical considerations that would support a decision to suspend this requirement for a mandate. Our state experiences regular extremes in weather that create serious challenges. Last October, our state experienced an unprecedented ice storm which crippled Oklahoma for days. This past February, our state experienced some of the coldest temperatures on record that pushed our resources to the breaking point. Each spring, our state is always on alert to respond to the terrible impact that can occur from devastating tornadoes. It is during these challenging times that the National Guard is most needed. The National Guard is uniquely positioned to step up and attack the hardest problems during the harshest times.

It is very apparent that Oklahoma must always have its full contingent of national guardsmen on call to answer these challenges when they come. We estimate that over 800 Oklahoma guardsmen have not and do not plan on receiving the COVID-19 vaccine. This constitutes 10% of Oklahoma’s overall force. It is irresponsible for the federal government to place mandatory vaccine obligations on Oklahoma national guardsmen which could potentially limit the number of individuals that I can call upon to assist the state during an emergency.