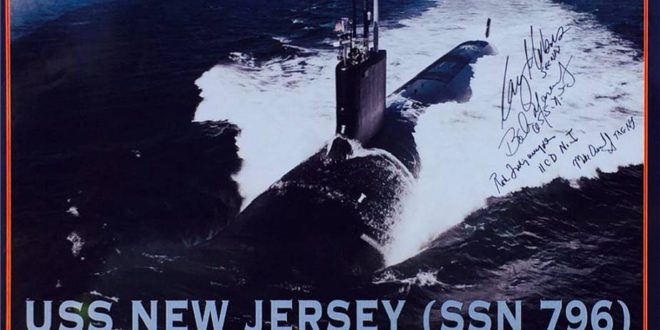 “For the first time in 30 years our state’s name will grace a @USNavy vessel and patrol the oceans in the name of peace and liberty. Honored to witness the christening of the third USS New Jersey submarine, “. Gov Murray

The Navy will christen one of its newest Virginia-class fast-attack submarines, the future USS New Jersey (SSN 796), during an 11 a.m. EST ceremony on Saturday, Nov. 13, 2021, at Huntington Ingalls Industry, in Newport News, Va.

The principal speaker will be Adm. Michael Mullen (ret), the 17th Chairman of the Joint Chiefs of Staff and the 28th Chief of Naval Operations. Mr. Frederick “Jay” Stefany, acting assistant secretary of the Navy (Research, Development, and Acquisition) and Vice Adm. Johnny Wolfe, Jr., Director, Strategic Systems Programs, will also deliver remarks. The submarine’s sponsor, Ms. Susan DiMarco Johnson, will christen the ship by breaking a bottle of sparkling wine across the bow in a time-honored Navy tradition.

The future USS New Jersey (SSN 796) is the third Navy vessel named in recognition of the state and is the 5th Block IV Virginia-class submarine to be built. The first USS New Jersey (Battleship No. 16) commissioned in 1906 and then sailed as part of the around-the-world cruise of the Great White Fleet. It spent most of its career in the Atlantic and West Indies, decommissioning in 1920.

The second USS New Jersey (BB 62) was commissioned in early 1943 before sailing for the Pacific. It served as a fast carrier escort and shore bombardment platform in the war against Japan, earning nine battle stars through the end of World War II. Although decommissioned in the post-war drawdown, it returned to service three more times over the next 45 years; once for the Korean War, once for Vietnam, and again for service in the 1980s at the end of the Cold War. New Jersey now serves as a museum ship in Camden, New Jersey.

The Navy will christen its thirteenth Spearhead-class expeditionary fast transport, the future USNS Apalachicola (T-EPF 13), during a 10:00 a.m. CT ceremony Saturday, November 13 in Mobile, Ala.

“This ship honors the city of Apalachicola, Florida, a city that represents America’s fighting spirit and dedication to duty,” said Secretary of the Navy Carlos Del Toro. “Apalachicola, like the other ships in the EPF class, will provide our warfighters the necessary high-speed sealift mobility and agility to accomplish any mission. I am thankful for this ship and its crew who will serve our nation for decades to come.”

The future USNS Apalachicola is the thirteenth ship in its class and will be operated by the Navy’s Military Sealift Command. The ship is named in honor of the city of Apalachicola, Fla. and will be the second U.S. Navy ship to bear that name. The first Apalachicola (YTB 767) was a Natick-class large harbor tug launched in 1963. The tugboat spent the majority of its service in the Puget Sound-area providing harbor services to various ships. Apalachicola was stricken from the Navy List in 2002.

EPF class ships are designed to transport 600 short tons of military cargo 1,200 nautical miles at an average speed of 35 knots. The ship can operate in shallow-draft ports and waterways, interfacing with roll-on/roll-off discharge facilities and on/off-loading the Abrams main battle tank (M1A2).

The EPF includes a flight deck for helicopter operations and an off-load ramp that will allow vehicles to drive off the ship quickly. EPF’s shallow draft (less than 15 feet) further enhances littoral operations and port access. This makes the EPF an extremely flexible asset for support of a wide range of operations, including maneuver and sustainment, relief operations in small or damaged ports, flexible logistics support, or as the key enabler for rapid transport.