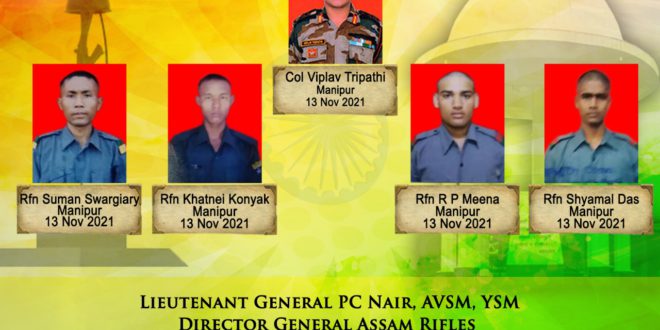 Lt Gen PC Nair, AVSM, YSM, DG Assam Rifles conveys heartfelt condolences to the families of our Brave Soldiers who made the supreme sacrifice in the line of duty in Manipur.

Suspected rebels ambushed an Indian paramilitary convoy in northeastern state of Manipur on Saturday, killing an army colonel, his wife, son and four soldiers, reviving concerns about a decades-old insurgency that was believed to have been mostly contained in recent years.

The army colonel was returning to his base after inspecting a forward camp of an Assam Rifles paramilitary battalion that he commanded when the rebels launched the attack on his convoy, first exploding an improvised explosive device and then firing from automatic weapons from both sides of the road, police said.

Assam Rifles is a paramilitary force operating under the Indian army.

At least five other Indian soldiers in the convoy were injured in the ambush and taken to hospitals.

The ambush took place about 10 a.m. local time (UTC +5:30), near Sehken village in Manipur’s Churachandpur district, very close to Myanmar’s western border. All seven people, including the colonel’s 8-year-old son, died on the spot, roughly 120 kilometers from the Manipur state capital of Imphal.

According to police, the soldiers from the convoy retaliated by returning fire. It is not known if the assailants suffered any casualties.

A source in Manipur Police told VOA it was not clear which insurgent group or groups may have been involved in Saturday’s ambush.

“A section of our intelligence say [Manipur-based insurgent group] People’s Liberation Army of Manipur [PLAM] carried out the ambush. Another section believes PREPAK [People’s Revolutionary Party of Kangleipak], another Manipur-based rebel group, was behind the ambush,” said the source, who asked that their name be withheld in order to speak candidly. “But we are pretty sure that the insurgents came from the Myanmar side and fled across the border after the ambush.”

India’s NDTV, however, has since reported that PLAM and Manipur Naga People’s Front [MNPF] claimed to have jointly carried out Saturday’s ambush.

Manipur Chief Minister N. Biren Singh said state and paramilitary forces are “already on their job to track down the militants.”

“The perpetrators will be brought to justice,” Singh said.

Condemning the ambush, Indian Prime Minister Narendra Modi tweeted: “I pay homage to those soldiers and family members who have been martyred today. Their sacrifice will never be forgotten. My thoughts are with the bereaved families in this hour of sadness.

About two dozen Indian ethnic insurgent groups currently are known to operate in Manipur. Some demand separate homelands for their tribes or ethnic groups. Some of them have bases and training camps inside the forests of Myanmar. And some of the insurgent groups are networked with different Myanmar-based Burmese rebel groups.

Saturday’s ambush is the first major attack on security forces in Manipur since June 4, 2015, when suspected Naga militants ambushed an Indian army convoy in Chandel district of the state, killing at least 20 soldiers.

Previous Israeli PM Maj. Bennett, Former IDF Company Commander and Minister of Defense
Next A Classic Case of Deception: escape of six American diplomats from capture in Iran in 1980.