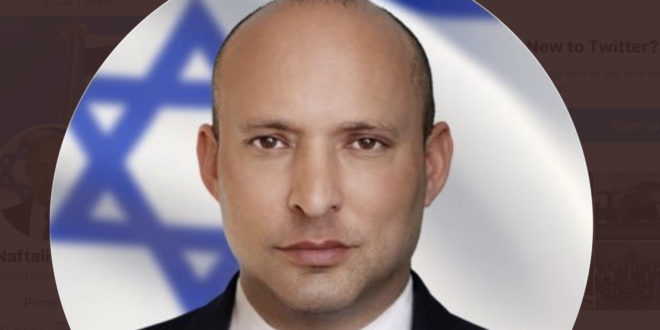 Who is the new Prime Minister, Naftali Bennett Chairman of the Yamina Party who will serve for only two years according to an agreement by the coalition with Lapid and six other parties, a tangled web that includes the Islamist Ra’am Party.

Bennett’s U.S. ties are deep, as his parents were American immigrants to Israel where he was later born in Haifa. He served in the IDF as a company commander in elite units and continues to serve in the reserves, holding the rank of Major.

Bennett is the first religious prime minister and first born of American parents. Like Netanyahu, he is fluent in English according to the Jewish Virtual Library,

In August 1990, Naftali Bennett was inducted into Sayeret Matkal, the Israel Defense Forces’ elite special-operations force. The team with which he went through the grinding process of becoming a full-fledged member of what’s called “the Unit” was sometimes referred to as the “dosim [pejorative term for ‘religious’] squad, ”  According to Hareetz

After the officers’ school, Bennett became a squad commander in another elite unit, Maglan, In an interview with Yedioth Ahronoth back then, Bennett said: “We had tremendous successes in Lebanon. We eliminated dozens of terrorists using new and surprising methods, which Hezbollah was unable to cope with.”

The Maglan unit (212) is a commando unit whose mission is to operate deep in enemy territory while focusing on attacking and destroying specific targets and gathering accurate intelligence. Maglan was established in June 1986 as an elite unit specializing in anti-tank warfare using advanced weapons. It is a part of the Commando Brigade.

The unit also has an advanced weapons development division whose mission is to find creative solutions and technological innovations in accordance with the operational needs and the classified activities of the unit.

In the Maglan, he pushed for more missions across the northern border. According to one of his soldiers at the time, when he wants something, he gets it. The words of the Maglan anthem – which Bennett wrote – describe its fighters as “devouring the prey,” while focusing on the mystery and secrecy that shroud their operations, the Haaretz

After his IDF service, Bennett studied law at the Hebrew University of Jerusalem. In 1999, in New York, he co-founded Cyota, an anti-fraud software company, and served as its CEO According-to Israeli Government official website. He and former Prime Minister Benjamin Netanyahu who appointed him the Minister of Defense split alliances before the election this year.

Bennett will not allow the reopening of the U.S. Consulate for Palestine in Israel.

Bennett is the author of the Bennett Plan which involves three divisions of the West Bank. Israel would annex Area C, while the Palestinian Authority would retain control over Areas A and B while working in concert with Israel’s security forces to ensure peace. Gaza would be ruled by Egypt. Bennett does not support the creation of a Palestinian state.

He is in a battle of words with U?s. rep. illian Omar:

There is a growing legitimacy to openly express anti-Semitism,” he told American Jewish leaders at a summit of the Conference of Presidents of American Jewish Organizations in Jerusalem. “This congresswoman is an anti-Semite, loud and clear.

“The single factor which can influence anti-Semitism, the increasing anti-Semitism, is the strength of the State of Israel,” Bennett continued. “The stronger Israel is, the more protected every Jew in the world is, regardless of their specific relationship with Israel.”

16 June Prime Minister Naftali Bennett, at the Prime Minister’s Office in Jerusalem, held his first working meeting with IDF Chief-of-Staff Lt.-Gen. Aviv Kochavi. They discussed the operational situation and current security challenges, the process of learning the lessons from Operation Guardian of the Walls and the importance of the continued implementation of the multi-year Tenufa plan.

Maj Bennett was drafted into the Israel Defense Forces ihn 1990. He served in the elite units Sayeret Matkal and Maglan reaching the rank of major. Part of his reserve duty included running the grueling trial period and entrance tests for the IDF’s elite units. Naftali has a law degree from the Hebrew University of Jerusalem. His parents immigrated from the United States to Israel.

Following are Prime Minister Naftali Bennett’s remarks, at the start of the weekly Cabinet meeting. (The remarks are translated from the Hebrew except where otherwise indicated.)

“Good morning to you all. We are getting underway. Each minister has already begun to work. I have spoken with each one of you recently. Taking up office went smoothly and government ministers are ready to get to work and move forward.

This morning, the ministerial committee approved Foreign Minister Yair Lapid’s proposal to approve the appointment of 36 diplomats to key Foreign Service positions. This is something that had been stuck for a long time. You [Foreign Minister Lapid] have opened the bottleneck and we are underway.

Due to the character of the government and the range of its members, the key to our success is trust, mutual trust, and the way to increase trust is that when there are misunderstandings, simply pick up the phone and call each other and resolve things quietly, without drama. We have come here to serve the people. All ministers share in this understanding: We are not the bosses of the citizens of Israel, we work for the citizens of Israel. This is the spirit that prevails among all members of the government.

Of all the people that Khamenei could have chosen, he chose the ‘Hangman of Tehran,’ the man infamous among Iranians and across the world for leading the Death Committees, which executed thousands of innocent Iranian citizens throughout the years.

Raisi’s election is, I would say, the last chance for the world powers to wake up before returning to the nuclear agreement, and to understand who they are doing business with. These guys are murderers, mass murderers.

A regime of brutal hangmen must never be allowed to have weapons of mass destruction that will enable it to not kill thousands, but millions.

Israel’s position will not change on this.

As we promised, we are submitting for government approval, the proposal of my friends, Defense Minister Benny Gantz and Finance Minister Avigdor Liberman, to establish a state commission of inquiry into the Mt. Meron disaster. Forty-five people lost their lives in that awful disaster and the responsibility for learning the lessons and preventing the next disaster is on our shoulders. A commission cannot bring back those who have perished but the government can do everything to prevent unnecessary loss of life in the future. Just as we said it would, a commission of inquiry will be established.

Alongside the commission, it is important to tell the worshippers and all of the people who go to Mt. Meron that we will do everything so that the tradition of festivities on Lag b’Omer, and throughout the year, will continue. People from all sectors go to Mt. Meron – ultra-orthodox, religious Zionism, traditional, Sephardi, Ashkenazi and secular. Our responsibility is to ensure their safety. This is the government’s job and we will do it……….

Lastly, today we mark nine years since the passing of the seventh prime minister, the late Yitzhak Shamir. We all recognize Yitzhak as a man of the Greater Land of Israel, a man of vision and action, who devoted his entire life to the state – in the underground, the Mossad, the Knesset and the government. However, there is a point that is less well known.

Shamir, together with Peres, established the first national unity government which, by the way, was anchored on rotation, in 1984 and they knew how to bring ideological rivals around the government table and save – there is no other word – the State of Israel from inflation of over 400% and withdraw the IDF from deep inside Lebanon. In 1988 as well, I seem to recall that it was not absolutely necessary then, but even without the political obligation, he chose to establish another unity government. This was Yitzhak Shamir, who by all accounts was a prominent right-winger.

What we learn from this is that there is a time for everything. Now is the time for unity and unity is in itself a critical goal. Today as well, the State of Israel was, up until a week ago, in a spiral, and everyone here in this room and the public at large outside, knows that our ability to work together is what will enable us to do good things. Then let us be inspired by Yitzhak Shamir. Thank you and good luck.”