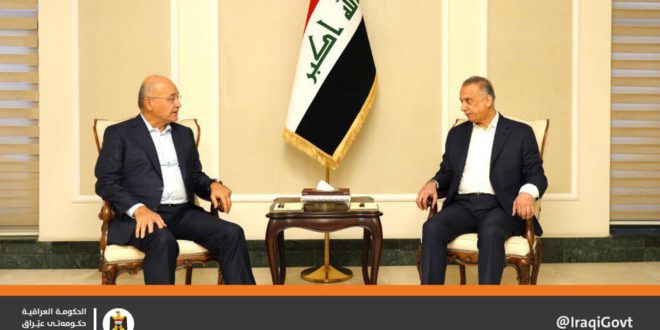 PM @MAKadhimi receives President of the Republic @BarhamSalih who condemned the cowardly terrorist attack that targeted the residence of PM @MAKadhimi , denouncing these bankrupt acts as trying to destabilise Iraq's security and stability.

PM @MAKadhimi receives phone calls from a number leaders and heads of governments who condemned the cowardly terrorist attack that targeted his residence, and expressed solidarity with Iraq and and the Iraqi people.

Three explosives laden drones were involved in the assassination attempt.

“The missiles of treachery will not discourage those who have faith nor will they shake the steadfastness and insistence of our heroic security forces to preserve the security of the people and do what is right,” PM Sid

The Ministerial Council for National Security: Our security forces will work to uncover the parties involved in this terrorist act, arrest them, and bring them to a fair trial.

The Ministerial Council for National Security: Those who think that they are beyond the reach of our security forces are delusional; there is no one above the law, and no one is greater than Iraq.