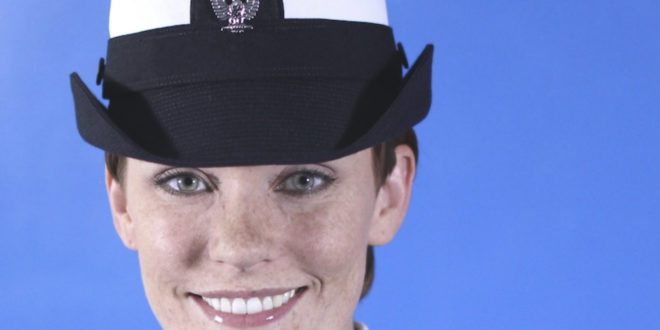 One of our favorite veterans is Jennifer Marshall, an actress, private investigator, and pin-up ambassador.

She hosts the CW’s docuseries “Mysteries Decoded,” and has appeared on many TV shows, including “Stranger Things,” “NCIS,” “Hawaii Five-0” and “Game Shakers.”

She was also in the Navy, serving from 1998 to 2003. Her assignments following basic training at Naval Station Great Lakes, Illinois, included Naval Base Ventura County, San Nicolas Island, California; and the aircraft carrier USS Theodore Roosevelt.

While on the Roosevelt, she deployed in support of Operation Iraqi Freedom, earning the enlisted aviation warfare designation.

Her duties included aircraft handler and aviation logistics. She was also a member of the ship’s security defense force team as well as the repair locker fire team.

She also worked as a representative for the Roosevelt’s Sexual Assault Prevention and Response program, advocating for sailors who had experienced trauma resulting from sexual assault.

After five years of service, Marshall was discharged as a petty officer second class.

Following her service, Marshall used her G.I. Bill to help pay for college at Virginia Wesleyan University. She then earned a graduate degree from American Military University.

Besides college, she became a licensed private investigator, which aided her character roles in the TV shows “Stranger Things,” “Mysteries Decoded,” and “NCIS.”

A few years after graduation, she moved to Los Angeles to seek a career in television and film.

In 2020, she returned to military service, receiving an Army commission in the California State Guard, serving in public affairs.

Marshall volunteers in her community by mentoring veterans looking to enter film and television, delivering food to homebound seniors through the local senior center and raising funds for veteran rehab equipment.

“A cause that is near and dear to my heart is the award winning non-profit, Pin-Ups for Vets,” Marshall writes on her website. “Through fundraisers and the sale of modest and classy pin-up calendars, Pin-ups for Vets has raised over $100k to fund our various veteran and troop initiatives.”

Marshall was born in Denver before moving to Carbondale, Illinois. She currently lives in Los Angeles.

In an interview by Justin Sloan for Military.com, Marshall said: “For anyone who is on the fence about serving — life is 90% attitude and 10% circumstances. In the military, you will sometimes feel like it is 90% circumstances and 10% attitude. It’s not. Just keep your eye on the prize, take pride in what you do, work hard and you will be rewarded, whether while in the service or once you separate.”

She added: “It sounds like a kindergarten saying, but I always like to say if something needs accomplished, vets can do it. Vets can do anything, so go out and do it.”

Previous Soldier of Fortune Visits a Master Knife Maker in Ukraine
Next A Jeep, a Soldier, Some Booze, and One Very Rough Night in Camp