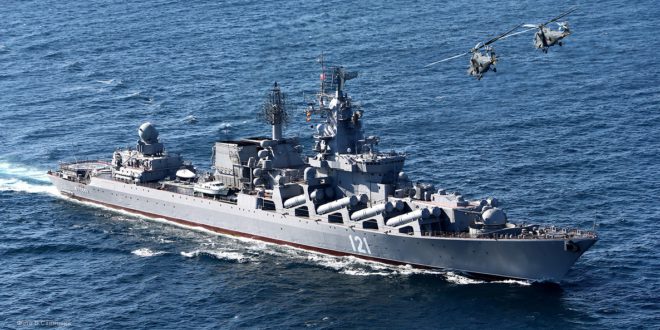 Moscow confirmed on Thursday that its Black Sea flagship, Moskva, has sunk. The report follows another from the Kremlin saying the ship had suffered serious damage from a fire following onboard explosions, and that the crew has been evacuated.

“The fire on the guided missile cruiser Moskva has been localized,” the Russian Defense Ministry said in a statement. “No open flames are seen. The explosions of ammunition have been stopped.”

Statements from Ukraine and Western sources, the ship was hit by a long-range missile. One claim from the governor of Odessa reportedly identifies the weapon as a Neptune anti-ship missile.

The ship is the most powerful in Russia’s Black Sea Fleet.

“This is a big deal,” one senior Navy expert told Soldier of Fortune.

Some reports indicate that the ship sank. The Kremlin says that it remains afloat.

“The cruiser has retained buoyancy and its main missile systems are not damaged,” according to the Russian government news agency, Tass.

“The crew has been evacuated to other Black Sea Fleet ships in the area. Measures are being taken to tug the cruiser to port,” the Defense Ministry said, adding that the cause of the fire was yet to be established.

The Moskva played a key role in the capture of Snake Island, and reportedly was the ship that Ukrainian defenders told to “go f— yourself.”

Previous ‘There is Nothing Left’: As Fighting Rages, Mariupol is Like WWII Dresden
Next New Military Aid Package to Ukraine Includes Mi-17 Helicopters, Howitzers, Javelin Missiles, and More