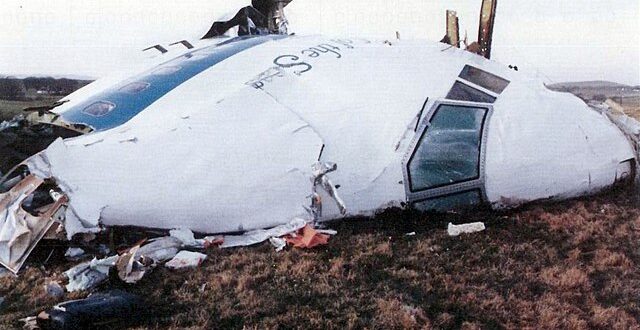 A Libyan intelligence operative suspected of making the bomb that blew up a U.S. passenger jet over Scotland in 1988 has been arrested by the FBI and is being extradited to the United States to stand trial, officials said on Sunday. The announcement comes within days of the high profile prisoner swap between Russia and the United States involving arms merchant Viktor Bout and American basketball player Brittney Griner.

The arrest of Abu Agela Mas’ud Kheir Al-Marimi came after a decadeslong Justice Department effort to prosecute him. Two years ago, then-Attorney General William Barr announced criminal charges against Mas’ud, accusing him of building the bomb that downed Pan Am Flight 103, killing 259 on board the jet, including 190 Americans, and another 11 on the ground.

The aircraft exploded December 21, 1988, over the small Scottish town of Lockerbie, 38 minutes after leaving London on a flight to New York. It remains the deadliest attack on British soil.

Details of Mas’ud’s apprehension were not immediately known. He faces two criminal counts, including destruction of an aircraft resulting in death. When the Department of Justice first announced charges against him in 2020, he was being held at a Libyan prison for unrelated crimes, but it was not clear how the U.S. government negotiated his extradition.

Scottish authorities said in a statement that the families of those who died had been told the news that the U.S. has Mas’ud in custody. In 2001, Abdelbaset al-Megrahi was convicted of bombing the flight, the only person found guilty in the attack.

“Scottish prosecutors and police, working with U.K. government and U.S. colleagues, will continue to pursue this investigation, with the sole aim of bringing those who acted along with al-Megrahi to justice,” Scotland’s Crown Office and Procurator Fiscal Service said in a statement.

Mas’ud’s suspected role in the Lockerbie bombing was one focus of a three-part “Frontline” documentary on PBS in 2015. The series was written and produced by Ken Dornstein, whose brother was killed in the attack.

“If there’s one person still alive who could tell the story of the bombing of Flight 103 and put to rest decades of unanswered questions about how exactly it was carried out — and why — it’s Mr. Mas’ud,” Dornstein wrote in an email to The New York Times after learning of Mas’ud’s arrest and that he would be prosecuted in the United States. “The question, I guess, is whether he’s finally prepared to speak.”

Mas’ud told a Libyan law enforcement official in 2012 that he was behind the attack. Once U.S. investigators learned about the confession five years later, they interviewed the Libyan official who had elicited it, leading to charges. Whether his confession, obtained in prison in war-ravaged Libya, will be admissible in a U.S. court is not clear.

In the interview with Libyan officials, conducted after the collapse of the government led by Moammar Gadhafi, U.S. officials said Mas’ud admitted building the bomb and working with two other conspirators to carry out the attack. He said the operation was ordered by Libyan intelligence and that Gadhafi thanked him and other members of the team after the bombing, according to an FBI affidavit filed in the case.

Mas’ud was born in Tunisia but has Libyan citizenship. He was the third person charged in the bombing, along with al-Megrahi and Al-Amin Khalifa Fhimah, who were charged in 1991. But Libya refused U.S. and British extradition requests.

Eventually, they were tried in the Netherlands under Scottish law. Fhimah was acquitted and al-Megrahi sentenced to life in prison.

In 2009, over the objections of families of the victims and the U.S., including President Barack Obama, Scottish officials released al-Megrahi because he had prostate cancer. He died in 2012.