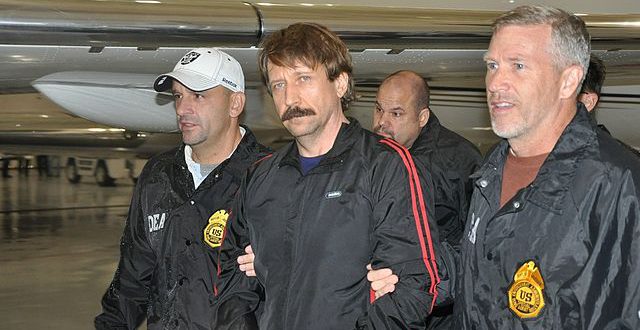 In a prisoner exchange between Russia and the United States, convicted arms dealer Viktor Bout was swapped on Thursday in exchange for American basketball player Brittney Griner.

Bout was in the news last month again after Moscow announced that talks wee underway for the U.S. to trade him for imprisoned American basketball player Brittney Griner. The possible swap was announced by Russian Deputy Foreign Affairs Minister Sergei Ryabkov, following a series of reports in the Western media that Griner would be held in bleak conditions at a notorious Russian prison.

Among the Russians who have been held in the United States, the most high profile is the 55-year-old Bout, who has spent the last decade in a U.S. federal prison. Nicknamed “the Merchant of Death,” he was convicted in 2011 on charges that included conspiring to kill Americans and was sentenced to 25 years behind bars.

Over the summer, U.S. Secretary of State Antony Blinken and Russian Foreign Minister Sergei Lavrov discussed a proposal that Blinken said involved Americans Brittney Griner and Paul Whelan. He did not name any Russian, but Bout has been at the center of speculation surrounding a potential prisoner exchange.

Who is the “Merchant of Death?”

From Dushanbe to Luanda

Bout is believed to have been born in 1967 in Dushanbe, the capital of what was then the Tajik Soviet Socialist Republic, though doubts have been raised about his exact birthplace. Little is known of his father, Anatoly. His mother, Raisa, has spoken out in defense of her son, most recently in 2021, when she released an open letter to Biden and Russian President Vladimir Putin.

Media reports say Bout studied at a specialized secondary school for foreign languages. Later, according to a 2001 United Nations report, he graduated in the mid-1980s from the Moscow-based Soviet Military Institute for Foreign Languages, a well-known training school for officers, diplomats, and in some cases, spies. He studied Portuguese, though some reports say he is a polyglot who also speaks several other languages. He served in the Soviet armed forces.

Graduating as a junior lieutenant, he served in the early 1990s in a Russian contingent – either air force or army aviation – as part of UN-backed peacekeeping operations in Angola, according to the UN report. He also served in Mozambique. He reportedly worked as a translator. The record is unclear as to whether he was employed by Russian intelligence agencies.

In the 1990s, Bout moved into private business, setting up an airline company to move cargo and people around conflict zones using Soviet-built, long-haul Antonov cargo planes. According to the UN report, he operated the biggest fleet of privately owned Antonov aircraft in the world, based in the United Arab Emirates.

”I never had investors,” Bout told The New York Times in a 2003 profile. ”It was never difficult finding money.”

According to the 2007 book Merchant Of Death, Bout built his business mainly by acquiring military planes left on airfields around the former Soviet Union.

Western intelligence experts and reporters who tracked Bout’s career say his access to the Antonov aircraft is among the strongest evidence pointing to ties to Russian organized crime, Russian intelligence agencies, or both. Bout has denied ties to the Soviet KGB or its main Russian successor agency, the Federal Security Service.

His cargos were varied: sometimes humanitarian, like peacekeepers; sometimes commercial, such as South African Gladiolus flowers, IKEA furniture, pencils, and frozen chicken. He also gained notoriety for moving weapons and ammunition into conflict zones, sometimes in contravention of embargos and international law.

But Bout’s experience, his fleet of aircraft, and his willingness to move cargo into hazardous, conflict-torn locations – such as Angola, Liberia, Rwanda, Afghanistan, and Colombia — made him a coveted purveyor of services, legitimate or otherwise. Among his clients were the United Nations, the United States, Russia, and others.

In the 1990s, Bout reportedly helped supply famed Afghan guerrilla leader Ahmad Shah Masud and the Northern Alliance in their fight against the Taliban. He also ferried UN peacekeepers to Somalia and East Timor. After the September 11 terrorist attacks, the U.S. government contracted with him to fly material into Iraq.

“There were very few other people who could deliver what he could deliver across the African continent particularly, and also in Afghanistan, where you have no roads, no trains, no other method of transportation,” Douglas Farah, a co-author of the Merchant of Death, said in an interview with RFE/RL in 2010.

Bout’s activity in Liberia, where he was closely affiliated with Charles Taylor, a warlord and politician, drew increased scrutiny and pressure on international institutions to curtail his operations.

In 2002, Belgium, where he had residence, issued an arrest warrant for Bout, but he fled to Russia, which refused to execute the Interpol warrant. In 2004, the U.S. Treasury Department imposed sanctions on him and froze some of his assets.

“Viktor Bout is indeed the chief sanctions-buster, and is a merchant of death who owns air companies that ferry in arms and other logistic support for the rebels in Angola and Sierra Leone and take out the diamonds which pay for those arms,” Peter Hain, a British politician and minister of the State, Foreign and Commonwealth Office, told a parliamentary hearing in 2000.

“The McDonald’s of arms trafficking” was another moniker given to him by arms experts, meaning that he was “the brand name” of gunrunning.

His notoriety also became a subject of popular fascination. The 2005 Hollywood movie Lord Of War, which told the story of an international arms dealer, was reportedly based on Bout’s exploits.

According to the U.S. Justice Department, between November 2007 and March 2008, Bout flew millions of dollars of weaponry into South America, supplying the Revolutionary Armed Forces of Colombia, or FARC, a guerrilla group designated as a terrorist organization by the United States.

In March 2008, Bout traveled to Bangkok, where he met with undercover U.S. law enforcement agents who were posing as potential brokers to ship more weapons to the FARC. Bout was then arrested by Thai police and, two years later — amid vocal protestations from Russia — was extradited to the United States to stand trial on charges that included conspiracy to kill U.S. citizens.

In November 2011, Bout was convicted by a federal jury on all counts, a prosecution that was aided by an associate who testified against him and by covertly recorded wiretaps. Five months later, he was sentenced to 25 years in prison.

Bout has contended that the case against him was politically motivated.

In a rare prison interview in 2017 that angered U.S. prison officials, Bout again professed his innocence, arguing he had committed no crime.

“There was no crime! This is about thought crime! About a crime that may be committed in the future. It’s like a sci-fi movie — you’re on trial for some future offense. At the trial, I was mainly blamed for what was on my mind! They didn’t have any proof. No crime was committed,” he told the state-controlled media outlet previously known as Russia Today.

Russian officials have echoed that claim. After a series of arrests and extraditions of Russian nationals, many for computer crimes, Russian officials have alleged that the United States was “hunting” Russian citizens around the globe, and have warned Russians to be cautious when traveling abroad.

Bout’s wife, Alla, has complained repeatedly to Russian news agencies, asserting that her husband has been mistreated while in U.S. federal prison.

Since his sentencing, Bout’s name has been floated by Russian officials, with varying frequency and intensity, as a possible candidate to be swapped for U.S. citizens held in Russia.

Previous ‘The Phantom’ Fouled the Latrine; We Had to Find Him Before Sarge Flushed Us All Down the Toilet
Next The Sands of Agadez: Where a Woman Knows More Than She Should About Gun Lords and Mercenaries