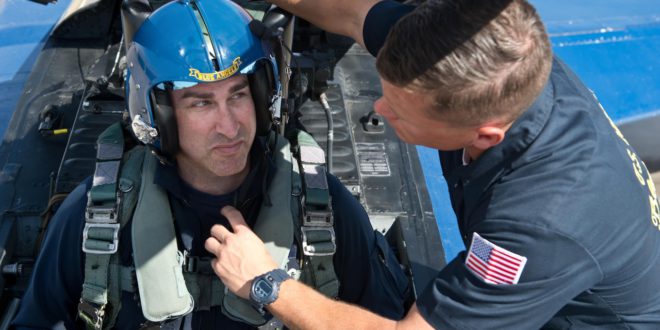 In 1992, Riggle was commissioned a second lieutenant in the Marine Corps Reserve. He served as a public affairs officer in New York City and Los Angeles; he also had deployments to Liberia, Kosovo, Albania and Afghanistan. On Jan. 1, 2013, he retired with the rank of lieutenant colonel.

Rob Riggle is known for his work as a comedian. He currently co-hosts the miniature golf game show “Holey Moley,” but is best known for being on “Saturday Night Live” and “The Daily Show.”

He was also a Marine.

In 1992, Riggle was commissioned a second lieutenant in the Marine Corps Reserve. He served as a public affairs officer in New York City and Los Angeles; he also had deployments to Liberia, Kosovo, Albania and Afghanistan.

Over the years, Riggle went overseas a number of times to entertain troops in USO shows.

In a May 31, 2013, interview with ABC News Angel Canales, Riggle offered this advice to military veterans: “Seek out mentors, people who are doing what you want to do. You have to decide what you want and have a goal. Don’t worry about how you’re going to do it. Just trust that you’ll get there. There’s no better citizen than a veteran. There’s so much waiting for you outside, and it’s not something to be intimidated by or scared by, it is something to be embraced. Decide what you want, and go get it.”

Riggle was born April 21, 1970, in Louisville, Kentucky. His family moved to Overland Park, Kansas, when he was two. He attended Shawnee Mission South High School, where he was involved in the school’s radio and TV stations. He was voted the most humorous in high school and graduated in 1988.

He then attended the University of Kansas, where he graduated in 1992 with a B.A. in Theater and Film.