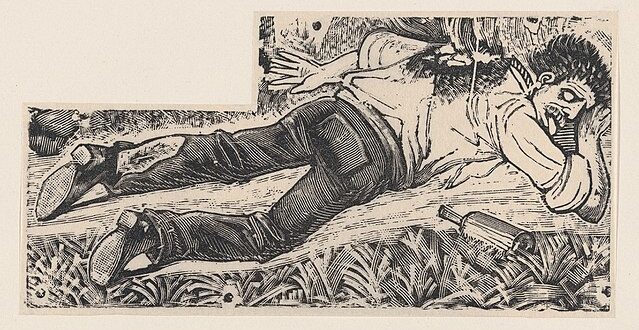 The consequence of heavy drink

Soldier of Fortune Magazine 2 weeks ago The Fire Pit 1,019 Views

The night started off fairly typically, just four Marines in a car, going out on the town to slam down beers. And it was innocent for most of the night, drinking and shooting pool.

I’ll call my companions Mike, John, and Steve, to pick some random names that will protect the guilty and the less-than-innocent.

It was getting to be later in the night when Mike disappeared. He had realized he was getting hammered and decided to step outside to get some fresh air to clear his head. The more experienced drinkers among us will know that this is an amateur move, especially if the weather is a bit chilly. The cold air can dramatically ramp up the feeling of being intoxicated, and apparently it did so in this case.

Mike sat in his car for a while, and at some point realized he had to go to the bathroom. He didn’t think he could stagger back into the bar, so he decided to go in the parking lot. And then he passed out.

And that’s how we found him, face down on the pavement, with his pants around his ankles and his bare ass sticking up in the air. He’s lucky he wasn’t in West Hollywood.

John and I held him upright while Steve pulled his pants up and got the car keys out of his pocket, all of us trying to not step in the puddle he had produced before passing out. Then we dragged him around to the passenger side and stuffed him in. We rolled the window down and made sure to prop Mike’s chin on the window sill in case he puked.

We were going down a boulevard, two lanes in each direction, and Steve was keeping it to the speed limit so as to not attract attention from the police. That meant that we were riding side by side with a car full of little old ladies, all made up and well-dressed, very prim and proper.

A light turned red and we stopped. The cars were kind of close together since Mike’s car was a big land yacht like a mid-sixties Catalina or something, and Steve, not being familiar with driving it, was hugging the center line. We were laughing at the situation, because the ladies obviously noticed Mike and were pointing at him and making comments amongst themselves.

“Oh, deary me! That young man looks like death warmed over,” John said in a little-old-lady voice.

Everyone sat there in shock

About that time, Mike suddenly came back to life. With no warning, he just stood up. His feet were flat on the floorboards and the majority of his body was out the window. And then he projectile vomited all over the little old lady’s windshield, hood, and fender. It was as if someone had thrown a bucket of chicken soup on her car.

Everyone sat there in shock for a moment. Mike groaned and dry heaved a couple of times before coming out with another shot of projectile vomit. And another. And another. It reminded me of that little girl in ‘The Exorcist’ when she heaves up pea soup all over the priest. But bigger. Chunkier. More vigorous. And the little girl only had one shot. Mike apparently had a full magazine.

The ladies were looking shocked and horrified and disgusted. John and I were laughing so hard we were crying. Steve was probably kissing his freedom and future promotions goodbye, after the DUI and whatever other charges he figured he was going to get.

At some point, John turned to me and asked “Jesus Christ, HOW MUCH DID HE EAT?” That just made us laugh harder.

The light turned green and both cars just sat there. I think Steve wanted the ladies to drive off but they couldn’t even see out of their windshield. I thumped the back of his seat and told him to go. He looked at Mike, still hanging out of the car but just dry-heaving now, reached over and grabbed his belt, and accelerated off slowly.

Mike sat down and quietly threw up again, painting the side of the car, and causing John to crowd my side of the back seat to get out of the blowback, but he and I laughed all of the way back to base.

Mike’s eyes were bloodshot because he burst blood vessels in his eyes from puking so violently. But we did make it back without spending time in handcuffs, so it was a victory.

Al Hagan previously wrote for Soldier of Fortune about being loose inside a plummeting Huey.