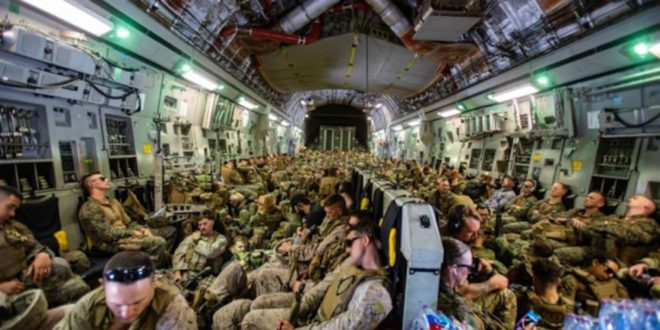 Marines fly to Hamid Karzai International Airport Kabul in Afghanistan, Aug. 17, 2021. The troops were among the first to provide security at the airport, which set the stage for the evacuation of more than 124,000 people from the besieged capital.

Army Gen. Mark A. Milley, the chairman of the Joint Chiefs of Staff, called U.S. efforts in Afghanistan a “tactical success, but a strategic failure.”

The Afghan government and military fell to the Taliban faster than anyone expected, and that was the failure, he said.

But the noncombatant evacuation operation managed to get more than 124,000 souls out of Kabul, even as the Taliban entered the Afghan capital. The effort involved thousands of service members from around the world. It was an amazing demonstration of professionalism in global reach for the United States Transportation Command, Milley said in his testimony.

Air Force Maj. Gen. Corey J. Martin discussed the operation last week with the Defense Writers Group. The keys to the evacuation operation were connectivity and planning, he said.

Planning for the noncombatant evacuation operation began in April, immediately after President Joe Biden said the U.S. effort in Afghanistan would end. “It started with planning, even though the timing of this event was not known,” the general said.

Members of U.S. Transportation Command integrated with representatives of the U.S. Central Command and the Joint Staff to plan and execute the retrograde operation of U.S. forces and equipment from Afghanistan, he said.

In August, the Taliban offensive against the Afghan government intensified and provinces began falling like dominos. Martin said the speed of the collapse was “a bit of a surprise,” but the Transcom planners were not starting from scratch when the need for the evacuation became apparent.

Every noncombatant evacuation is chaotic. The evacuations of Saigon in 1975 and Lebanon in 1975 and 2006 are just some of the examples. Those operations had the benefit of being in countries with access to seaports. The same didn’t apply to landlocked Afghanistan.

It allows the command to direct the operational movement of C-17s or KC-135 aircraft quicker, he said.

The speed was needed as the dissolution of Afghan forces necessitated the transport of U.S. combat forces to secure Hamid Karzai International Airport in the Afghan capital city of Kabul. The command had to get 6,000 service members and their supplies to the country quickly.

The aircraft and personnel to maintain and fuel them were already in place, and it “allowed the operational movement to be ready to take combat forces, literally almost overnight to Hamid Karzai International in the face of the advancing Taliban to secure that airfield, and allowed for the movement of evacuees out, and then the redeployment of the combat forces,” Martin said.

Connectivity among the Office of the Secretary of Defense, the Joint Staff and the U.S. combatant commands was paramount. Martin said there were constant communications with higher headquarters and with U.S. Central Command, U.S. European Command and U.S. Northern Command.

In addition, there were nationals from many allied and partner countries in Kabul. Martin said at least 30 nations cooperated with the effort, which required constant communications with State Department colleagues, Homeland Security and more.

This interagency approach was most apparent at the Global Operations Center at Scott Air Force Base, Illinois, the home of Transportation Command. Martin called the center the “heartbeat” of the command with all elements represented. “At the action officer level, there was integration with Department of State personnel, Customs and Border Patrol, and the FAA [Federal Aviation Administration],” he said.

It also helped point where there were seams between the commands and entities, allowing the action officers to quickly address these, he said.

The overall effort was mammoth and complex, Martin said. It is more than the gray Globemaster C-17s. It was the personnel maintaining the aircraft. It was the refuelers — in the air and on the ground. It was the combat troops on the ground and the airmen who took over the air traffic control in Afghanistan for the operation. It was State Department personnel processing the evacuees.

All these people combined to make the noncombatant evacuation operation from Afghanistan a “tactical success,” Martin said.

Transcom is already looking at the experiences in this effort to see what can be done better, the general said.

Previous Desert Storm and the “Bunker Buster” Bomb that ended the 1st Gulf War in 1991
Next Bea Arthur, one of the first women to join the Marines, WWII