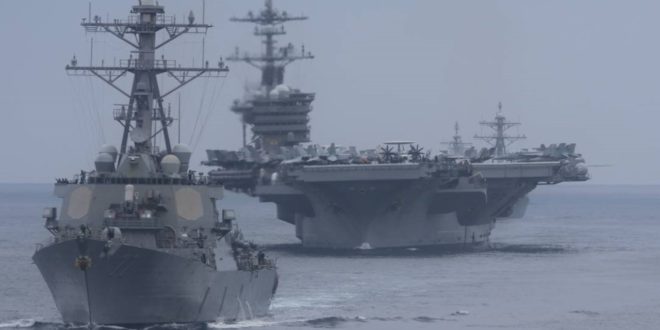 The USS Stockdale steams in formation with other ships and aircraft, including the USS Carl Vinson, July 11, 2021, i Navy Petty Officer 1st Class Alexander Fraser n the Pacific Ocean.

DOD Mock-ups of U.S. aircraft carriers the Chinese have built in the desert not main concern

Instead of Intent Behind Chinese Military Exercises

Media reports have called attention to mock-ups of U.S. aircraft carriers the Chinese have built in the desert, presumably to train their own military for confrontation with the U.S. Navy.

But the Defense Department is,  instead, focused on its own preparation and readiness and current Chinese behavior with neighbors in the Indo-Pacific region.Spotlight: Focus on Indo-Pacific

“What we’re concerned about … is the increasing intimidation and coercive behavior of the Chinese military in the Indo-Pacific, and also the coercive tactics they’re using, even using economic tools around the world to bend other nations to their will or to their view of what’s in their best interest,” Pentagon Press Secretary John F. Kirby said during a briefing today at the Pentagon.

The U.S. supports a free and open Indo-Pacific region, Kirby said, saying also that the U.S. is going to continue to work with allies and partners toward that end.

“I think [the report] makes it very clear what our understanding of their intentions are and their capabilities are and how they’re developing those capabilities and to what ends,” Kirby said. “Clearly, they have invested a lot in particularly air and maritime capabilities that are designed largely to try to prevent the United States from having access to certain areas in the Indo-Pacific. What we’re focused on is that pacing challenge and making sure that we maintain the right capabilities and the right operational concepts to meet our security commitments in that part of the world.”

According to the report, a big part of China’s effort to match the strength of a “strong enemy” — which is understood to mean the likes of the United States — involves major modernization and reform efforts within China’s army. Included there are efforts to achieve “mechanization,” which the report describes as the Chinese army’s efforts to modernize its weapons and equipment to be networked into a “systems of systems” and to also utilize more advanced technologies suitable for “informatized” and “intelligentized” warfare.

Also of significance in the report are Chinese efforts to project military power outside its own borders through the establishment of overseas logistics and basing infrastructure not just inside the Indo-Pacific region, but elsewhere in the world.

The DOD is currently working on a new National Defense Strategy, which is expected to be complete by early next year.

At the same time, the department is working on the NDS, it is also working on the Nuclear Posture Review. The NPR will spell out, among other things, priorities for modernizing the U.S. nuclear triad and ensure that the United States has the right capabilities matched with the national nuclear strategy.

The review will also examine how the United States can take steps to reduce the role of nuclear weapons in its national security strategy while ensuring the strategic deterrent remains safe, secure and effective and that the extended deterrence commitments to its allies remain strong and credible.

“Across the review itself, the views and perspectives of our allies and partners are important and consultations with them and hearing them out and their perspectives has been and will continue to remain important as the review continues down the path,” Kirby said. “We are, as appropriate, consulting with allies and partners in the course of this review and certainly remain open to listening to and hearing out their perspectives.”

mock-ups of U.S. aircraft carriers the Chinese have built in the desert,

Previous 1989: the Berlin Wall Comes Down
Next Opinion: From the Author of SAS, We Dared Win: America, Deja Vu Africa