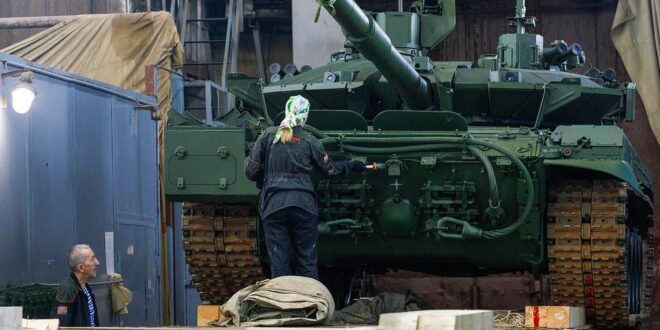 Russia has begun boosting production of all types of weapons from tanks and guns to high-precision missiles and drones, Russian Security Council Deputy Chairman Dmitry Medvedev said on Monday. In a reference to possible malfeasance in the production cycle, Medvedev added that contractors may be subject to criminal charges over unspecified issues.

“The production of weapons and special equipment of all types is increasing manyfold: from tanks and guns to high-precision missiles and drones. Brace yourself!” he said on Telegram.

The politician addressed Russia’s opponents and advised them not to hope that the country would run out of armaments, according to the state sponsored news agency, TASS.

“When reading enemy analyses, I have repeatedly come across allegations that Russia will soon run out of military equipment and widely-used weapons. Like, everything was used up. Don’t hold your breath,” he said.

The official said that under orders from the commander-in-chief, Russian President Vladimir Putin, he traveled to Nizhny Tagil and inspected the production of tanks at the Uralvagonzavod corporation, the largest producer of armored vehicles in that area.

According to Medvedev, discussions took place during the trip about the issues of accelerating shipments of equipment to the armed forces, and fixing existing problems.

“Attention has been drawn to the fact that all contractors could be held to account, including on criminal charges, and requests have been accepted for ministries and other agencies that are in charge of government contracts,” he said. “Supervision over the execution will continue.”

With reporting from TASS.

Previous A Bomb in the Briefcase: New Book Shows How Close Iran Came to Unleashing Terror Attack in Paris
Next ‘The Helicopter Fell Apart’: Third Russian Ka-52 Goes Down Over Kherson