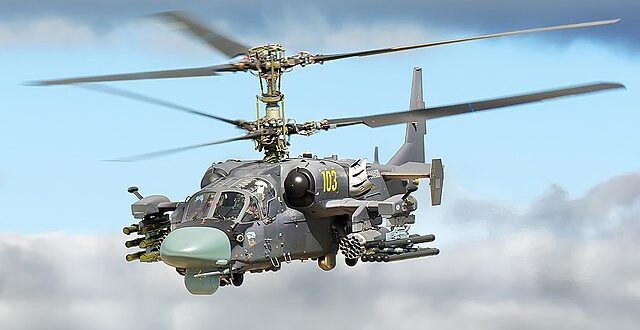 Ukrainian forces took a bite out of another alligator this week, when anti-aircraft gunners shot down an additional Russian Ka-52 helicopter. Soldier of Fortune saw the helicopter go down on Monday in the Beryslav district of Kherson. It was the third Ka-52 alligator to be shot down in a short space of time.

There was a bright explosion, followed by the outline of the helicopter in distress. The aircraft fell apart before my eyes.

There was no indication what happened to the air crew. The cockpit accommodates two crew members sitting side-by-side on top of ejection seats. The sky was too dark to determine whether they ejected safely.

According to reports pieced together from eyewitness and other accounts, a unit of the anti-aircraft missile brigade of the Ukrainian Armed Forces shot down the third Russian Ka-52 helicopter in a single day, raising the overall losses to the Russian fleet.

Russia has lost more than 25% of its in-service fleet of Ka-52 attack helicopters, according to the UK’s Ministry of Defence (MOD).

In an update posted on Twitter, the MOD said there have been at least 23 verified losses of Russia’s Ka-52 (NATO reporting name HOKUM) attack helicopter in Ukraine.

“This represents over 25% of the Russian Air Force’s in-service fleet of 90 Ka-52s, and nearly half of Russia’s total helicopter losses in Ukraine,” the ministry wrote.

The MOD said Russia has likely lost attack helicopters “from Ukrainian man-portable air defence systems (MANPADS), while the helicopters frequently operate with less consistent top-cover from combat jets than they would expect under Russian military doctrine.”

“Russia is still failing to maintain adequate air superiority in order to reliably carry out effective fixed wing close air support near the frontline, and its artillery ammunition is running low,” the MOD said.

“Russian commanders are likely increasingly resorting to conducting high-risk attack helicopter missions as one of the few options available to provide close support for troops in combat.”

Soldier of Fortune will provide updates on the situation as available.

A.R. Fomenko is a journalist based inside Ukraine.