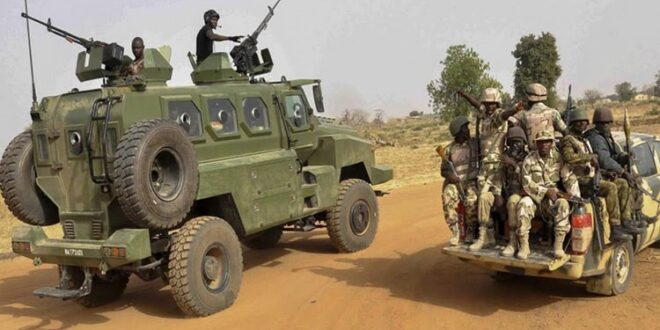 MINNA, NIGERIA – Nigerian military troops have killed eight people believed to be members of the Islamic State terrorists after repelling what would have been bloody assault on a military base in Niger state Central Senatorial District, where many jihadists are being held.

According to two military sources, dozens of Islamic State West Africa Province (ISWAP) militants attempted to overrun the military cantonment in Wawa, a remote New Bussa town close to Benin Republic boundary late in the early hours of Sunday to free more than 1,000 of their members in the military captivity, the officers said.

The Wawa attempted raid intensifies the threat posed by the ISWAP terrorist group against the most populated and oil-rich African nation as the group continues to expand outside the northeast part of the country, where they held hostages for more than a decade.

One of the military sources on Monday said, “The terrorists attacked the base around midnight in large numbers but they were pulverised with air support, leading to the death of eight of them.”

Three of the hooligans including their kingpin, were apprehended during the unfortunate incident.

However, the military is yet to officially comment on the attack.

Reports revealed that forces at the military headquarters had earlier received intelligence that fighters were planning to attack them, enabled them to be battle ready, the sources stated.

They disclosed that the terrorist group tried to blast blast the gates of the military base with dynamite and sophisticated weapons, but met strong resistance from troops at the Cantonment.

The official said, “It was obvious they wanted to free other terrorists being held in the facility as they did in Kuje Prison.”

Recall that ISWAP militants had in June blasted their way into the Kuje prison in the federal capital territory Abuja, and discharged numerous inmates, including more than 100 high-profile terrorists kept in jail.

Nigeria’s police in June announced they had beefed up security, especially in the capital, after the United States and Britain governments warned of a possible security threat in Abuja.

The United States Government had earlier ordered diplomats’ families to vacate Abuja due to what it referred to as a “heightened risk of terrorist attacks” before the jailbreak.

About 1,700 nabbed jihadist suspects are kept in Wawa Cantonment detention for the past five years.

The military camp was used between 2017 and 2018 as a court to try some of the 2,500 Boko Haram and ISWAP suspected terrorists.

More than 40,000 people have so far been slain, and more than two million more displaced from their homes by the crisis in Northeast Nigeria.

ISWAP has claimed several attacks far from the Northeast, including in Kogi and Niger states that both fringes the Federal Capital Territory, where Abuja is situated.

Charles Woke is a reporter based in Nigeria.

Previous Protests Spread Through Brazil in Wake of Presidential Election
Next Memories of a Moscow Airfield, and the Sad Truth About Shattered Hopes