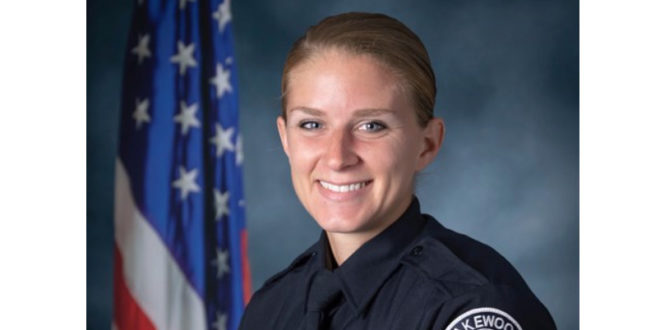 Two Colorado communities faced tragedy in December 2021 when a gunman opened fire in both cities, killing five and injuring others. Among those injured was a Lakewood Police Agent. The gutsy officer Ashley Ferris was shot in the belly and lost the use of one leg – and even so, managed to shoot and kill the murderous gunman. Local police have released the surveillance camera footage from the incident.

After shooting and killing 38-year-old Danny Schofield at the Lucky 13 tattoo shop, the 47-year old male suspect, Lyndon James McLeod, on Dec. 27 gunned down 28-year-old Sarah Steck as she worked at the Hyatt House. At several points during this situation, the suspect exchanged gunfire with Lakewood and Denver Police. From there, the shooter headed to another area, where he encountered Lakewood Police Agent Ashley Ferris. Agent Ferris ordered him to drop his weapon as he approached her. The suspect ignored her commands and shot Agent Ferris, striking her in the abdomen.

Newly released video shows the incident as it unfolded.

One witness told a local news station: “We seen the lady officer just yelled, ‘Put your gun down. Put your gun away!’ And we just seen the suspect pull his gun out and, literally, shoot her, in front of us and she was on the floor, she was on the ground. He turned and he kept shooting, almost shooting toward us, but my friend, backed up, just in time or we would have been shot, as well.”

Agent Ferris, shot and wounded on the ground, returned fire on the suspect. He died on scene. If not for the heroic efforts of Agent Ferris and other law enforcement, this incredibly violent tragedy could have been even worse, officials said.

When the shooter hit Ferris in the abdomen, the bullet fragmented. She told FOX31 back in May that fragments hit her sciatic nerve and her right leg was subsequently paralyzed. However, the pain wasn’t the feeling she was focused on in those moments.

“I was angry honestly, I was angry,” Ferris told a local news station. “I was like, how dare he? How dare he do this? But all things considered, the best thing he could have done was display his weapon to me, because at that time, I didn’t see his weapon. I didn’t know who he was. He had police identifiers on. What if I had let him walk away? Instead, he made the choice to fire his gun at me, and he sealed his fate that way.”

“All of us at the Lakewood Police Department are incredibly proud of Agent Ferris and the bravery shown by her and her fellow law enforcement officers during this active shooter situation,” said Lakewood Police Chief Dan McCasky. “Our hearts are incredibly heavy with the loss of life and injuries suffered by others during this rampage. Our thoughts and prayers are with the Cardenas, Gunn-Maldonado, Scofield, Steck and Swinyard families, as well as the families of those injured.”

Ferris has recovered, and said she plans to return to patrol duty.

Previous Deadly Assault on Special Forces in Vietnam Left ‘Drag Marks and Blood Trails Throughout the Camp’
Next Russian Soldier in Kharkiv: ‘Everything is F*cked’ as Ukraine Forces Surround His Unit