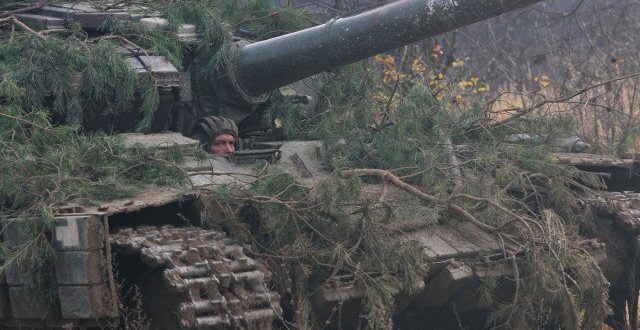 Russian Soldier in Kharkiv: ‘Everything is F*cked’ as Ukraine Forces Surround His Unit

Russian soldiers say they are surrounded in Kharkiv Oblast without food, water, or coms, according to intercepted communications that were published by Ukrainian intelligence.

“Everything is fucked,” one soldier tells another in one clip. “We’ve got nothing left now. No water, no food.” He and another soldier talk about a 7th company that was wiped out, with no one left alive.

Ukraine’s armed forces started offensive action Monday on several fronts in the south of the country, the military announced, launching a much-anticipated counteroffensive to regain the Kherson region from Russian invading forces.

Russia captured swathes of southern Ukraine in the first phase of its February 24 invasion. Ukraine has been pledging for weeks to launch a major counteroffensive to retake land and has used Western-made long-range weapons to hit Russian supply lines.

Humenyuk said Ukraine’s recent strikes on Russia’s southern logistical routes had “unquestionably weakened the enemy,” adding that more than 10 Russian ammunition dumps had been hit over the past week.

However, she declined to disclose more details about the new offensive.

“Any military operation needs silence,” she said, adding that Russia’s forces in the south are “rather powerful” and have been built up over a long time.

Russian-installed officials in the region on August 29 announced the evacuation of residents of nearby Nova Kakhovka, a city frequently targeted by Kyiv’s forces, to bomb shelters from their workplaces. The officials citied Ukrainian rocket strikes on the city.

The Moscow-appointed regional leader of Crimea, Sergei Aksyonov, dismissed the Ukrainian assertion of a counteroffensive in the Kherson region as false.

With reporting from RFE/RL.

Previous The Neighborhood Recluse Had a Secret: He Was a War Hero
Next Tiny Black Hornet Spy Drones Will Buzz the Battlefields in Ukraine